Torrent Pirates released the fifth episode from season four of the popular TV-series “Arrow” leaked online a few hours ago. The leaked print is a rough DVD cut and comes from a preview copy that was sent out for review by Warner Bros. and features the first appearance of DC Comics’ John Constantine.

Arrow has been one of the torrent blockbusters with millions of downloads per episode. The current season is it fourth one and the earlier three had topped the torrents downloads list at one time or the other.

The episode which is yet to be aired is being lapped by torrent lovers. Even though TV-show leaks are relatively rare, the fifth episode of Arrow was uploaded to public and private torrent sites a few hours ago.

The source of the leak is unknown but a warning screen at the starts shows that it originates from a preview copy, which was sent out for review by Warner Bros. Television. 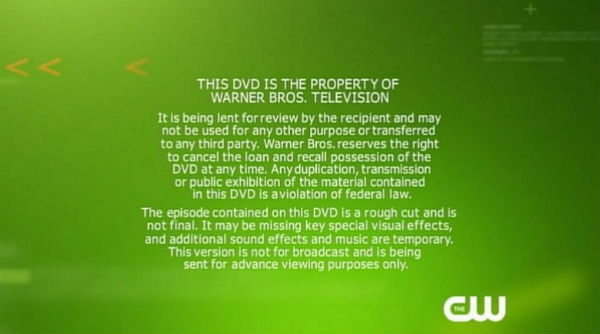 The message warns the viewer not to distribute the video to third parties and suggests that the leaked version is not the final cut. “The episode contained on this DVD is a rough cut and is not final. It may be missing key special visual effects, and additional sound effects and music are temporary,” it reads. The quality of the video of the leak is not particularly great, which is usually the case with these type of leaks. Still, that won’t deter the torrent lovers from downloading it.