Was it a natural death, or something else that killed Debian Linux founder Ian Murdock

Ian Murdock, who was well known for being the founder of the Debian Linux operating system as well as the creator of apt-get, passed away. The individual was 42 years old and we are confident that his sudden passing will definitely put the software community in a very emotional state at this current time. However, while the intelligent individual contributed a lot to the software universe, the mystery surrounding his death is rather shocking. This is because according to the details of his Twitter account, Ian Murdock tweeted the following:

“I’m committing suicide tonight.. do not intervene as I have many stories to tell and do not want to them to die with me #debian #runnerkristy67” 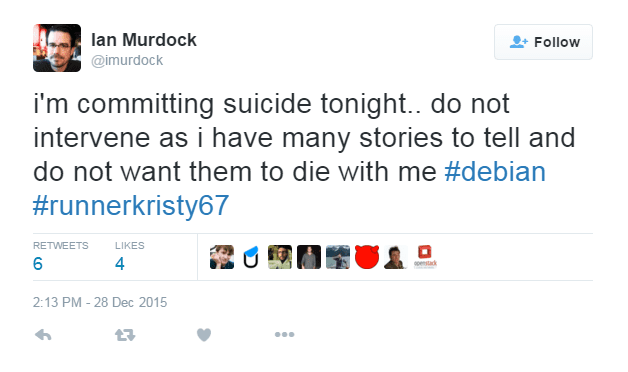 A blog post on Docker spoke very highly of Ian Murdock as it states the following:

“It is with great sadness that we inform you that Ian Murdock passed away on Monday night. This is a tragic loss for his family, for the Docker community, and the broader open source world; we all mourn his passing. To Ian’s children, family and loved ones, we offer our full support and deepest sympathies.”

At this current point, the cause of his death is uncertain and could come from a number of reasons. However, since he tweeted through his official over a definite intention of committing suicide, it is quite possible that Ian Murdock might have taken his life, but the reasons which would drive him to such a path are currently not known. However, at the same time, some people speculated that the official Twitter account of Murdock had been hacked and someone wanted to troll his fan base.
A few days ago, Ian Murdock posted out some tweets suggesting that he became a victim of police brutality.

Considering himself as a law abiding citizen, Murdock stated that a female police officer had ripped his underwear, which is equivalent to rape. It is possible that the emotional trauma suffered by Murdock due to these incidents might have caused him to take his life, but the individual has no history of physical or emotional abuse, which once again brings us back to the subject that the cause of death is still unknown.

We will continue to update you on what exactly transpired but if we are speaking from a person belonging to a software community, then we have lost a gem of an individual.