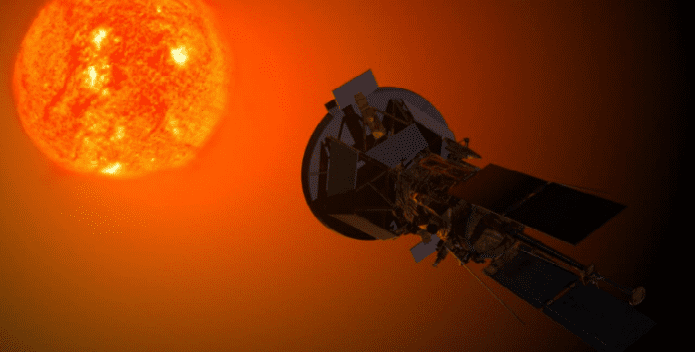 NASA’s Solar Probe Plus to be launched in 2018, will fly ten times closer to the Sun’s corona

NASA first discussed sending a suicide probe into the Sun itself nearly 60 years ago. Looks like the space agency is making good on a space probe that will travel nearly ten times closer to our star than the planet Mercury.

Scientists at NASA and Johns Hopkins University are working on a space probe that will enter the Sun’s atmosphere for the first time, giving scientists invaluable data on the Sun’s corona. They also hope the space probe to provide new data about the Sun’s effects on everything from space weather to short term climate change.

Named by the NASA as the “Solar Probe Plus“, it is currently being built by NASA with assistance from Johns Hopkins University’s Applied Physics Lab and scientists from a variety of other universities and institutes. Built at a cost of $1.5 billion, Solar Probe Plus will carry an array of sensors into the sun’s corona, which will hopefully survive temperatures of over 2,500 degrees Fahrenheit and blasts of radiation and energized dust at levels not experienced by any previous spacecraft.

According to Ralph McNutt of Johns Hopkins University, one of the probe’s team leads told FORBES that creating a spacecraft that can survive contact with the sun requires considerable scientific mastery. Solar Probe Plus will use seven Venus flybys over nearly seven years to gradually shrink its orbit around the Sun

“At its very closest approach of only 3.8 million miles from the Sun’s surface, Solar Probe Plus will be subjected to up to 475 times the solar irradiance experienced at Earth. Thus, the science collection phases of the mission during close encounters are designed to be autonomous. That is, without real-time direction from ground-controllers.

Data taken during these collection phases will be saved on solid state recorders for subsequent downlink via a high gain antenna pointed back to Earth.??The probe’s thermal protection system is an 8-foot-diameter, 4.5-inch-thick, carbon-carbon, carbon foam shield that sits atop the spacecraft. Basically, most of the entire spacecraft “hides” behind this shield during the spacecraft’s closest approach to the Sun, says McNutt.

During several loops around the inner solar system, the solar arrays will retract and extend as the spacecraft swings toward or away from the Sun, making sure the panels stay at proper temperatures and power levels.

The Solar Probe Plus, which is projected to launch in 2018, will primarily seek to explain why the corona, or the layer of plasma surrounding the Sun, is so much hotter than its surface, as well as what accelerates the solar wind.