Remember our previous report that wannabe group of hacker called SkidNP had vowed that they would bring down the Steam servers through the Christmas day. Well, the new kids on the hacking block seemed to have fulfilled their promise. Exactly half hour ago, gamers using Steam have started reporting that the Steam servers are facing a worldwide outage.

This is the status report of Steam servers : 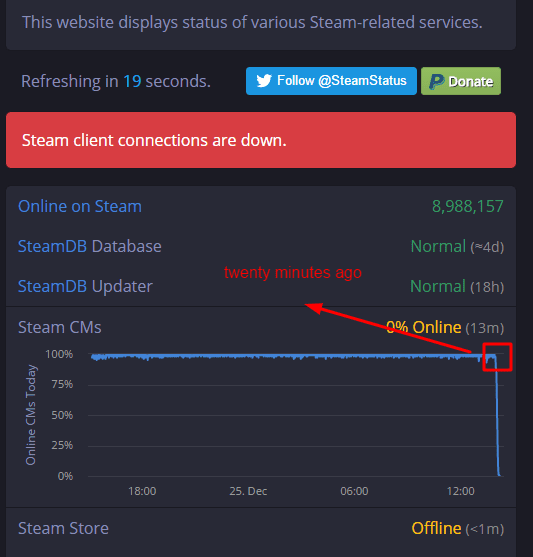 As usual, Steam users took to Twitter in throngs to complain against the unavailable Steam servers.

@steam_games @Steam_Support @SteamBeta : the server is crashing down , like its chrismas and its a shooting star 😀

@Dededetour I can't even check Steam because the store's down. How can I surprise my friends now? ;.;

K, a member of the SkidNP group, in an interview told us that they would bring down both Minecraft and Steam servers starting today. When asked why they wanted to attack Steam and Minecraft, K told us that SkidNP wanted to bring the vulnerabilities in Steam and Minecraft servers to the notice of the world. K added that, “Steam will be a hard target as they are smart unlike Mojang, Xbox and PlayStation.”

Though we are awaiting confirmation from SkidNP regarding their role in bringing down Steam servers, from the looks of it, they seem to have fulfilled their promise. Whether or not SkidNP has DDoSed Steam servers, there is huge war going on out there as you can see from this maps of DDoS attacks.

Sadly for Steam gamers, the attacks on the US grid seem to be increasing as the time is passing.

UPDATE 1: SkidNP seems to have continued with the attack as the Norse DDoS map suggests. Users are reporting that they’re logging in as other users. People that made purchases are now realizing that they’ve bought games for other people, while on another account.

UPDATE 2: After they log in, users are now reporting seeing Steam pages in other languages.

UPDATE 3: SteamDB, a site that writes about Steam and Valve, issued a clarification on the issue with the Steam Store: “Valve is having caching issues allowing users to view things such as account information of other users. Don’t use Store for now.” Cache errors appear due to high traffic loads. It is unknown if this was caused by the Christmas sales or the DDoS attack.

UPDATE 4: Softpedia reported that Phantom Squad joined the attacks on the Steam network.

However, SkidNP member K confirmed to us that they are going at it solo.

@ Techworm_in im pretty sure im ddosing steam not them skidnp.