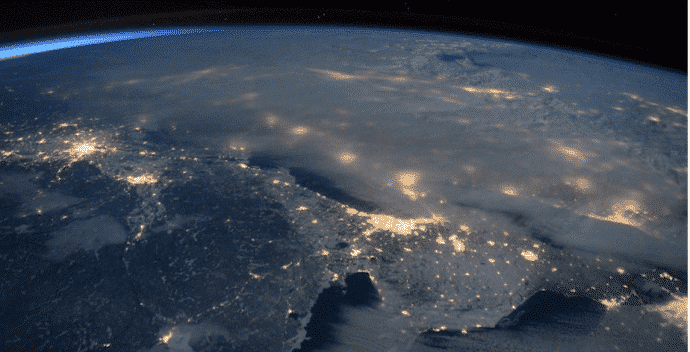 NASA astronaut Scott Kelly from America captured images of the monster winter storm Jonas affecting a quarter of the United States’ population from the International Space Station (ISS) on Saturday morning. The images were captured by Kelly floating about 250 miles above the Earth providing a unique view of the planet’s weather.

Kelly, who has spent more than 300 continuous days aboard the ISS is currently on a year-long mission in space, which will end in March — took the photo shortly before the sun rose over the US East Coast.

By that time, “he will have compiled 522 total days living in space during four missions,” NASA said in a statement.

The major blizzard has coupled in areas with a rare phenomenon known as “Thundersnow.”

One of his photos shows the large storm system covering much of the East Coast with dull city lights illuminating just underneath the thick cloud cover.

The worst of the storm has yet to come forecasts the project. Kelly pointed that out in one of his photos, showing the huge system moving from Chicago toward the east. “It clearly has a long way to go,” he writes.

As the storm hit Tennessee on Friday, residents took to Twitter to report booms amid the snowy sky. Jonas stands to rival some of the most historic blizzards on record.

The storm is going to sweep across the East Coast through Sunday (January 24), bringing heavy snow, strong gusts of wind, and flooding.

The storm has caused a headache of travel delays, airport closures, and dangerous conditions.

NASA’s Suomi NPP satellite also documented the storm system, which stretched from New England to Florida. Much of the storm has moved toward the Northeast and brought blizzard conditions to cities such as Washington D.C. and Baltimore.

The storm also brought snowfall as far south as Georgia. Hundreds of people were stranded on icy highways Friday evening and Saturday morning in Kentucky, Pennsylvania and West Virginia.

NASA is testing how long-duration spaceflights effect the human body for future travel to Mars and other deep space missions.