Bitstamp, a bitcoin exchange portal based in Slovenia, has issued a warning to users of a Google Chrome extension which steals bitcoin while making a transfer.

Be careful! We have uncovered a Chrome extension called BitcoinWisdom Ads Remover that will try to steal your #bitcoin.

BitcoinWisdom Ads Remover Chrome extension available Chome webstore, flaunts itself as ad removerfrom the BitcoinWisdom.com, a website for consulting all kinds of Bitcoin-related statistics, all presented in easy-to-understand charts.

According to Bitstamp, this extension contains malicious code that is redirecting payments to its own Bitcoin address, instead of the one intended by the user making the transaction. Bitcoin Web app developer Devon Weller confirmed Bitstamp’s findings.

@bitstamp Confirmed. I looked at the source code. It replaces QR code images on bitcoin exchanges with its own addresses.

The Nashville, Tennessee-based developer said that the extension was secretly replacing QR codes with its own. 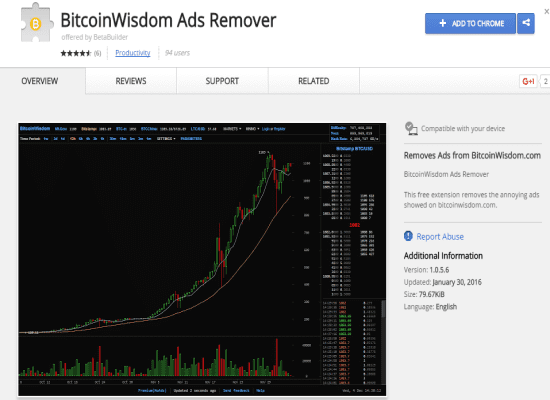 For the initiated, Bitcoin users use mostly QR codes as one of the methods to make payments or transfer Bitcoin from one account to the other. This is done because Bitcoin wallets addresses are extremely long strings of random characters which are difficult to memorize. Therefore many Bitcoin exchanges provide the option of taking the whole string and rendering as a QR code. Users can then scan the QR code with their phone (running a Bitcoin payments app) and approve the payment/transfer.

The BitcoinWisdom Ads Remover Chrome extension manipulates a webpage’s source code and replaces the QR code of a payment’s destination with one of its own.

The Chrome extension was still available through Google’s Chrome Web Store. In July 2015, many users reported having similar issues with the same extension.