Two astronomers from Columbia University in New York are proposing that Earth use lasers to hide itself from potential alien foes and to prevent the potential annihilation of the human race.

Professor David Kipping and graduate student Alex Teachey published a paper in the journal ‘Monthly Notices of the Royal Astronomical Society’ on Thursday on how our Earth can conceal itself from other intelligent life that may want to exploit our planet for its natural resources.

Several well-known scientists, including Stephen Hawking, have warned against humanity spreading our presence to intelligent life on other planets. It “perverts” the technique scientists already use now to look for distant planets around other stars. This method depends on staring at these suns, hoping to catch an object passing in front. When such a “transit” takes place, there is a dip in light when a planet moves directly in front of the star it orbits.

The US space agency’s Kepler telescope has identified more than a thousand planets this way. These events – transits – are the main way that the Kepler mission and similar projects search for planets around other stars. So far Kepler alone has confirmed more than 1,000 planets using this technique, with tens of these worlds similar in size to the Earth. Kipping and Teachey speculate that alien scientists may use this approach to locate our planet, which will be clearly in the ‘habitable zone’ of the Sun, where the temperature is right for liquid water, and so be a promising place for life.

The two authors of the new study suggest that transits could be masked by controlled laser emission, with the beam directed at the star where the aliens might live. When the transit takes place, the laser would be switched on to compensate for the dip in light.

“It doesn’t have to be one huge laser; it could be an array positioned around the Earth. Or you could put it in space as a satellite, and we’ve calculated that the International Space Station already collects exactly the amount of energy we would need,” Prof Kipping told BBC News.

According to the authors, producing a continuous 30 MW laser for about 10 hours, once a year, would be enough to remove the transit signal, at least in visible light. The energy needed is comparable to that collected by the International Space Station in a year. A chromatic cloak, effective at all wavelengths, is more challenging, and would need a large array of tuneable lasers with a total power of 250 MW. 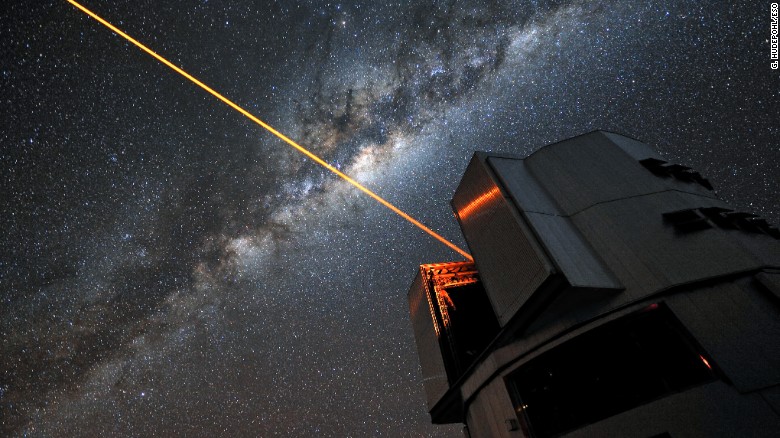 “Alternatively, we could cloak only the atmospheric signatures associated with biological activity, such as oxygen, which is achievable with a peak laser power of just 160 kW per transit. To another civilisation, this should make the Earth appear as if life never took hold on our world”, said Alex.

The lasers could also be used to modify the way the light from the Sun drops during a transit to make it obviously artificial, and thus broadcast our existence, as well as conceal our presence. The authors suggest that we could spread information along the laser beams at the same time, offering a means of communication. These are a suite of gases that include oxygen, ozone and methane.

“If we just cloaked out those biosignatures then another civilisation might detect our planet through a transit, everything would add up, but Earth would appear as a dead world and they’d soon lose interest,” Prof Kipping added.

David comments: “There is an ongoing debate as to whether we should advertise ourselves or hide from advanced civilisations potentially living on planets elsewhere in the Galaxy. Our work offers humanity a choice, at least for transit events, and we should think about what we want to do.”

The two scientists suggest that the Search for Extraterrestrial Intelligence (SETI), which commonly currently looks for alien radio signals, could be widened to search for artificial transits. Currently, many experiments are under way that is trying to see if aliens are actually signalling us with lasers.