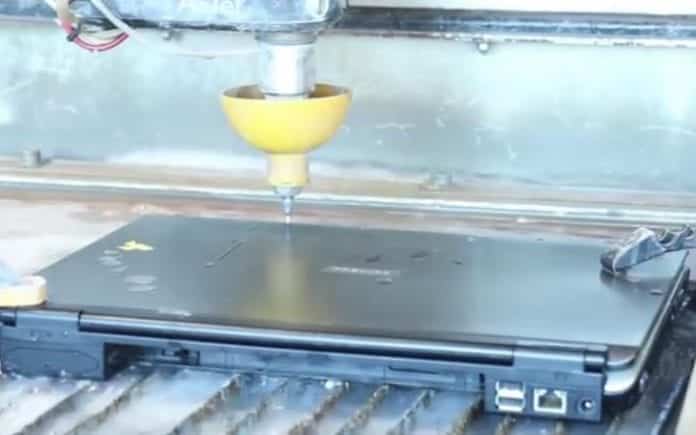 There are a ton of videos posted showing how people go to the limits experimenting on consumer electronics to see how much they can withstand. Over here, we have a laptop that has its resilience tested with something that we have not seen before, a powerful waterjet.

Unfortunately, the laptop was not as resilient as we would have hoped because the powerful waterjet tears right through the chassis of the mobile machine. In case you were wondering, the laptop was a 2007 Toshiba, and notebooks of that particular era were extremely bulky compared to the slim form factor machines that are being sold today.

In short, the powerful waterjet would have absolutely no issue tearing through slim notebooks, so it is a definitely a very good idea that your current laptop steers clear from this dangerous contraption. There is a video posted on YouTube, and courtesy of Boing Boing, we were able to witness the prowess of the powerful waterjet.

Coming to the physics part of things, the max Abrasive Waterjet is a device that cuts through just about anything using the power of a 60,000 psi jet of water. In comparison, the pressure in a car tire is often somewhere 35 psi, meaning that the waterjet is like a light saber made entirely of water and capable of slicing through anything in its path.

Check out the video below to see how the waterjet works.