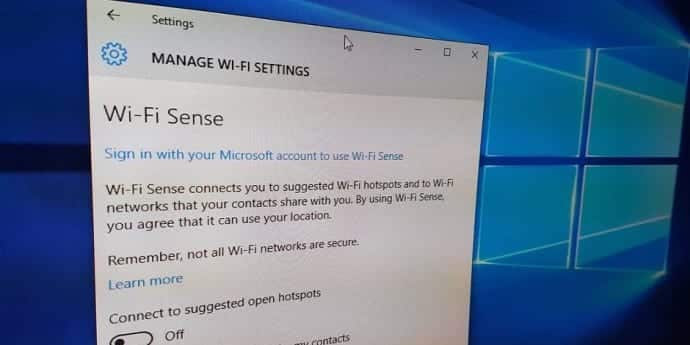 Microsoft has announced that it will be removing its ‘Wi-Fi Sense’ sharing feature from Windows 10 with an upcoming Windows 10 Insider Preview update. However, public Wi-Fi login info will remain in the app though.

The users could easily share their Wi-Fi login information directly with all their contacts and friends using this feature. It also helped them keep track of and connect automatically to open Wi-Fi hotspots, and networks shared by their contacts. However, it ran into controversy due to issues related to privacy concerns. Further, experts found that the feature actually automatically shares your Wi-Fi passwords with all Outlook, Skype and Facebook contacts with those who also use Windows 10.

According to Gabe Aul, the VP of Engineering, the change is basically due to maintenance costs and low demand:

“We have removed the Wi-Fi Sense feature that allows you to share Wi-Fi networks with your contacts and to be automatically connected to networks shared by your contacts. The cost of updating the code to keep this feature working combined with low usage and low demand made this not worth further investment. Wi-Fi Sense, if enabled, will continue to get you connected to open Wi-Fi hotspots that it knows about through crowdsourcing.”

Besides the Wi-Fi sense feature removal, Microsoft has upgraded the Edge Browser and its extensions in the new Windows 10 Insider Preview update. Users can now easily install Edge extensions directly from the Windows Store. Adblock and Adblock Plus Edge extensions have also been introduced with the new build.