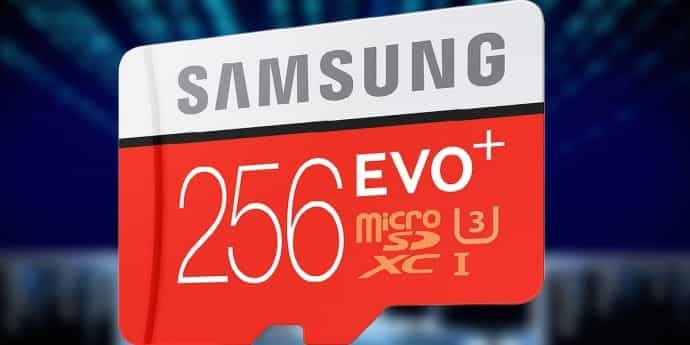 Samsung has announced the first mainstream EVO Plus 256GB microSD card, which is hyped as the market’s highest capacity microSD card for its class. Competitor SanDisk currently offers a maximum capacity of 200GB in its microSD portfolio.

Samsung’s EVO Plus 256GB microSD card works with smartphones, tablets, 360-degree video recorders, action cameras, and drones. It can record up to 12 hours of 4K Ultra HD 4K-resolution videos, or 33 hours of full HD and 46 hours of HD video without having to change or replace the memory card replacement. The new 256GB capacity doubles the storage of the previous Samsung EVO Plus 128GB microSD card, which was released last year. Users can also store photos as much as 55,200 and up to 46 hours of HD videos and up to 23,500 MP3 files/songs.

The EVO Plus 256GB leverages Samsung’s advanced V-NAND technology to provide quoted read and write speeds up to 95MB/s and 90MB/s, respectively. Samsung indicates that this will provide general consumers and professionals with the right amount of user convenience for storing heavy-loaded, high-resolution photography, 4K video recording, and graphic intensive multimedia.

Samsung says the new microSD card can handle ‘extreme conditions,’ being x-ray-proof, temperature-proof, waterproof to IPX7, and magnet-proof. It has a UHS-1 Class 10 speed class and a 10-year limited warranty.

“Our EVO Plus 256GB microSD card, will provide consumers with large capacity, and high read and write speeds. We are excited to offer our customers convenient and seamless multimedia experiences when they access, store and share all of the content they create and capture,” he added.

The EVO Plus 256GB microSD card will launch ion the U.S., Europe and China (and more than 50 countries in total) in June for $249.99. In the Evo Plus microSD portfolio, Samsung also offers 16GB, 32GB, 64GB, and 128GB storage options. The company currently has EVO, EVO Plus, Pro, and Plus lines that offer microSD cards in different markets.