Do you think that programmers do not have fun? Yes…Then, well how would you explain TrumpScript, LOLCODE, Chef, Shakespeare, Whenever and Malbolge?

So, what happens when you add Donald Trump, cats, recipes and Shakespeare’s poems to programming languages? You end up getting error messages such as “I’m really rich, part of the beauty of me is I’m very rich”, or LOLCats rule your code, or source code has rhymes and a hint of tragedy and the language basically does what it wants, when it wants or it looks like a cooking recipe.

TrumpScript: “We hope our efforts will make programming great again”

TrumpScript may be declared as official programming language of USA after Donald Trump wins the election (just joking). It is a language based on the life and quotes of the illustrious U.S. presidential candidate Donald Trump.

As the undeniably best presidential candidate in the 2016 language, four Rice University students decided that “the current field of programming languages does not include any that Trump’s glorious golden combover would approve of” and created something worthy of a presidential candidate during a 36-hour hackathon. Here are some of TrumpScript’s features:

Inspired by lolspeak, LOLCODE is a language expressed in examples of the lolcatInternet meme. The language was created in 2007 by Adam Lindsay, researcher at the Computing Department ofLancaster University.

This esoteric programming language shoots from the LOLCats phenomenon and uses LOLCats syntax to function properly. LOLCODE’s keywords are drawn from the heavily compressed (shortened) patois of the lolcat Internet meme. The moment you look at the ‘Hello World!’ code, you will surely ignore all its weaknesses.

LOLCODE may be attractive, but it’s more than a cute face. According to the official site, there are many different implementations in languages such as .NET, Java, Python, Perl and PHP.

Shakespeare: The ‘to be or not to be’ programming language

Designed by Jon Aslund and Karl Hasselstrom, this programming language was created with the intention to make the source code appear to be something other than programs; in this case, Shakespearean plays.

In the beginning of the program, a character list declares a number of stacks with names like “Romeo” and “Juliet”. These characters enter into dialogue with each other in which they manipulate each other’s topmost values, push and pop each other, and do I/O. The characters can also ask each other questions which behave as conditional statements.

On the whole, the programming model is very similar to assembly language but much wordier. Also, variables must be named after Shakespeare’s characters and constants are decided by positive or negative nouns.

Here is a small part of the source code: 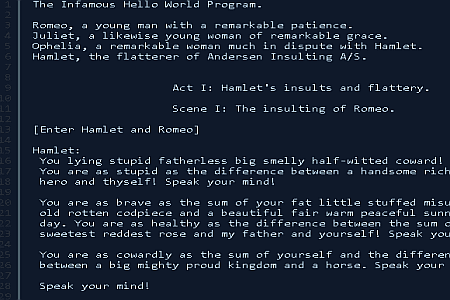 Whenever: Can you handle it?

This programming language does what it wants, when it wants. According to the project description, it has “no sense of urgency. It does things whenever it feels like it, not in any sequence specified by the programmer.” Not only data structures are hyped, but also variables. Program code lines are always executed (eventually), but the order doesn’t have to bear any similarity to the order in which they are indicated. It does contain some dedicated statements to deal with the random nature of the execution environment even though it has no flow control functionality and no variables. 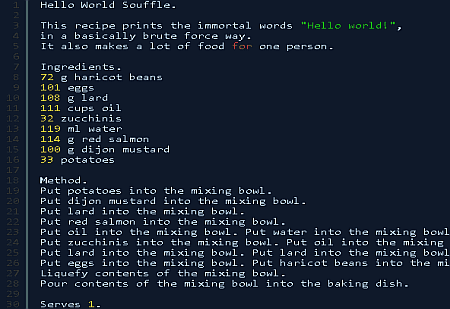 In short, the output must be delicious and simple to prepare, recipes are for people with different budgets and they must be metric. Here is the source code for ‘Hello World!’:

Ben Olmstead created this programming language in 1998 and named after Dante’s Ninth Circle of Hell. Malbolge was specifically designed to be almost impossible to use, via a counter-intuitive ‘crazy operation’, base-three arithmetic and self-altering code. It builds on the difficulty of earlier, challenging esolangs (such as Brainfuck and Befunge), but takes this feature to the extreme, playing on the entangled histories of computer science and encryption.

Warning: Don’t feel bad if you find Malbolge terrifying, as it was created using an algorithm. Don’t believe it? Here is the source code for ‘Hello World!’: