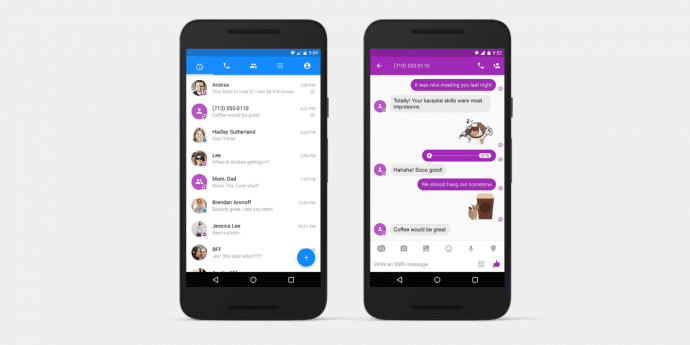 Confirming the announcement, David Marcus, Facebook Messenger Vice-President wrote on his page, “A lot of Android texting apps didn’t keep up with the evolution of messaging, so we felt like we truly had to make Messenger the best SMS client for Android. As a result, in addition to having a fully integrated app for all your messaging, you’re now able to send voice clips, stickers, and even share your location over SMS on top of standard texting features. You will now also enjoy all the things you’ve come to love about Messenger for all your messages, including chat heads and more.”

Facebook says that iOS doesn’t currently support app permissions for accessing text messages, although the SMS recipient can be on any platform.

Further, to protect privacy, Facebook does not process your SMS or store your conversations through its servers, only on the phone. Facebook says: “SMS in Messenger doesn’t send, upload or store your conversations on Facebook servers. All messages are sent and received via SMS”. Facebook also won’t merge your SMS threads into Messenger threads with the same person, as it could cause chat timeline chaos if you have mistakenly ended up Messengering and SMSing with someone at the same time.

1. Open Messenger. Then Click On The Profile Button On The Top Right

It will take you to this page with all of your profile settings.

2. Scroll Down To See If You Have A SMS Button Under Notifications & Sounds

If you do, click on the SMS button and slide the blue dot to make Messenger your default SMS application. If you don’t have the SMS button, then proceed to Step 3.

3. Go To The Google Play Store To Check For An Update

If your phone has received but not yet installed the update, you will see an option to update the app in this window.

This will finally enable the option on your phone. Then proceed to Step 5.

5. Open Messenger And Text As Usual

Once you have made Facebook Messenger your default SMS program, your Facebook Messenger messages will appear in blue within the app, while your SMS messages will appear in purple. In either case, starting a conversation works the same way as always: Either tap an on-going conversation to add to it, or tap the “write” button, choose your recipient either by phone number or Facebook name, and text away. Regular text message fees apply.

So, what are you waiting for? Just go and explore. SMS support has already been rolled out as part of version 75 of Facebook Messenger.