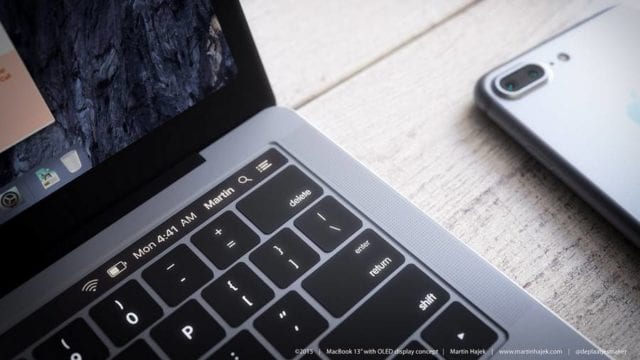 It was reported last month that Apple was planning a major MacBook Pro revamp that would bring support for Touch ID as well as a new OLED touch bar in place of the function keys. Now, macOS Sierra API changes further suggest at those upcoming features.

A number of new resources from macOS Sierra suggest support for the rumored OLED touch bar. For instance, “kHIDUsage_LED_DoNotDisturb” reference points to a Do Not Disturb button, and “kHIDUsage_LED_NightMode” suggests a night mode button on the OLED touch bar. At present, Do Not Disturb can be accessed on the Mac from the notifications pane, but with the inclusion of OLED touch bar, there would be a dedicated touch button for the feature. Additionally, there are new resources with the “kHIDUsage_LED” title that apply to fast forward, rewind, play, pause, rewind, and power functions, all of which are currently situated in the function row of keys, which the touch bar would replace.

As noted by 9to5Mac, the same code also includes a power button and the batch of control buttons are currently found in the physical Mac function keys, which are rumored to be replaced by the planned OLED touch panel. Also, detected are macOS Sierra references that drop hints of upcoming biometric features for the Mac desktops and laptops.

Some new API changes concealed inside the source code for macOS also disclose TouchID is in the works as well. First spotted by Mac Generation, the new APIs suggest that the OLED Touchbar on the rumored MacBook Pro will dynamically adjust to show system information and soft keys linked to other applications.

While the documentation for the new APIs provides no information to developers, it only states that the technology is still in development. It is unclear when Apple plans to unveil the new MacBook Pro. However, with the macOS Sierra not expected to be released until this fall, it might be a few more months before it hit the stores.