Note : This post is NSFW hence reader discretion is required before you proceed to read the article.

One fine summer day, Matt opened an email. Little did he know that the contents of the email could give him a shock of his life. The contents of the email sent by hackers contained a clipping of Matt wanking in front of his computer. The email further read that if he agreed to pay a ransom of $10,000, the hackers would not release the video clip to public. However, if he failed to pay them the ransom, they warned that they would release the video on his Facebook timeline and mail it to his all friends.

It so happened that unknown to Matt, his PC was infected by a ransomware. The ransomware was secretly filming Matt’s intimate activities when he was in seventh heaven doing what he was doing, and relaying it back to the ransomware creators server somewhere in Africa.

“There I was in all my glory,” he told triple j’s Veronica & Lewis. “There was an email saying they were going to release footage to all my Facebook friends and people I worked with if I don’t pay them money.”

“Initially I laughed,” says Matt thinking that the hackers from Africa may hardly know his friends in Australia. He immediately shot of a mail to the hackers daring them to release the footage.

But all his false bravado was wattered down when the hackers sent a second mail with a screenshot of his Facebook friends, and personal details from his website. He realised the threat was very very serious. They asked for $10,000. He began negotiating.

The hackers, who wrote every second email in French, wanted Matt to send the money to Mali in west Africa. He negotiated with them to bring down from $10,000 to $3,000.

But then he suddenly changed his mind. He posted this message on Facebook: 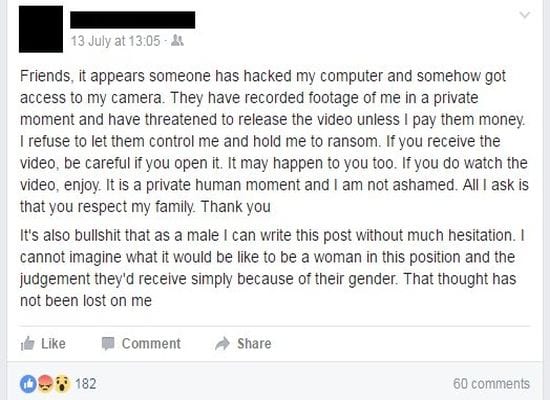 “I put up a Facebook post and let everyone know I was hacked,” he said. “I let them know they got me in a private moment and they threatened to release a video unless I paid them money. I let everyone know if they get a link to be careful if they click on it, but if they do watch the video, then enjoy.”

“It’s not something to be ashamed of,” Matt added. “It wasn’t an easy post to put up.”