A Canadian Sikh man has wrongly been identified as a terror suspect in the Nice, France attack – the second time he has been confused for a terrorist this year

It was happening again: A Photoshopped selfie of Veerender Jubbal circulated on Twitter as that of a person “reportedly involved” in the deadly attack in Nice, France. Just months ago, Jubbal was defending himself against a viral campaign to frame him as one of the terrorists involved in the Paris attacks.

TechWorm had reported earlier how the Anti-GamerGate critic’s image was photoshopped to show he was one of Paris Attacks terrorists. (See Also: This is how Sikh Man’s Selfie Was Photoshopped To Resemble A Paris Attack Terrorist And Shared By An ISIS Channel)

After the Paris attacks, a doctored version of the image showing Jubbal wearing a suicide vest with a Quran in place of the tablet was widely shared on social media. 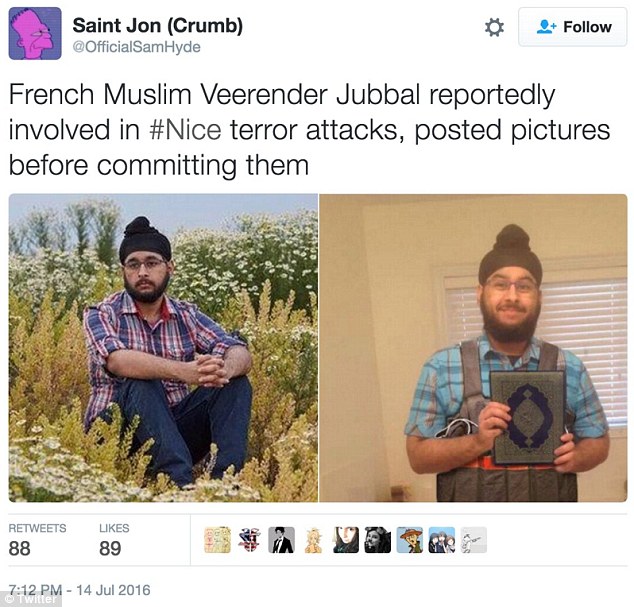 The now-suspended Twitter user @OfficialSamHyde tweeted a doctored selfie of Jubbal, a Sikh freelance writer, shortly after the attacks in Nice, France, on Thursday that left at least 84 people dead. The tweet claimed that Jubbal was a “French Muslim” who was “reportedly involved in #Nice terror attacks, posted pictures before committing them.”

Jubbal’s friends feared the worst: The last time a troll tried to connect the writer to a major attack, some media outlets picked up on the hoax as fact. The fallout from the hoax took a huge toll on him.

“The last time around it was so disheartening that his life hasn’t been the same since,” said Jubbal’s friend Simran Jeet Singh, a senior religion fellow at the Sikh Coalition, in an interview Friday morning.

Singh and other friends worked quickly to try and ensure that the latest campaign against Jubbal wouldn’t spin out of control this time around. “The response was swift and clear enough that Twitter actually suspended his account,” Singh noted. The account in question was suspended a few hours after a mutual friend brought the offending tweet to Singh’s attention. So far, it appears that no news outlets have picked up on Jubbal’s photo as that of a legitimate suspect.

“There’s a danger here in terms of the individual. It puts his life at risk,” Singh said. But he was also worried that the trolling targeting Jubbal “perpetuates negative stereotypes” targeting “people who look a certain way.”

He added: “It’s a really scary situation for a lot of people.”