The American multinational telecommunications conglomerate, AT&T is facing a huge outage in the United States. The outage is apparently making it difficult for AT&T subscribers to make or receive calls to AT&T and other US network. Some AT&T subscribers have also reported problems with Internet connections. According to reports, the AT&T services are currently down in California, Houston, Miami, Gonzales, Prairieville, San Francisco, Los Angeles, Dallas, Mountain View, Rowlett, New York and other parts of the United States.

The company has not issued any statement regarding the outage.The problem is acutely widespread causing frustration among AT&T subscribers to take to Facebook and Twitter to vent their ire. 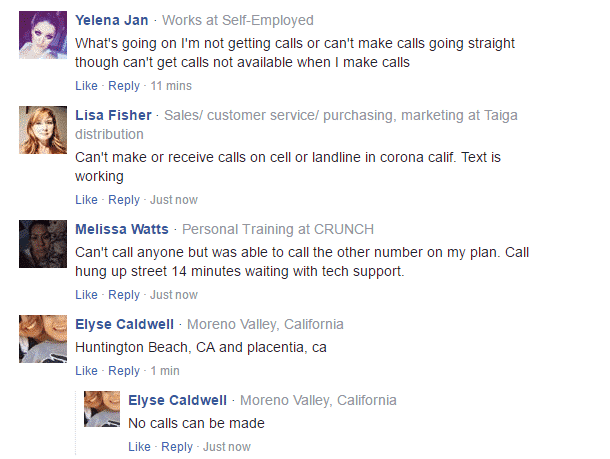 The AT&T outage problem is aggravated by the fact that customers calling AT&T support at their helplines and 611 are unable to get through due to the outage. At this point, only the local and long distance phone services and mobile services seemed to be affected by this outage while AT&T Broadband Internet services are reported as working normally. However, some users did indicate that they were having trouble surfing the Internet.

For the uninitiated, AT&T offers local and long distance phone service, broadband internet and mobile phone services to individuals and businesses. Television service is available through the U-verse brand, which is delivered over the internet (IPTV). AT&T has near-national wireless coverage. Internet and local phone services are available in select areas and use either DSL or Fiber (Uverse) technology networking technology. AT&T also operates the Wayport Wi-Fi hotspots.

The outage comes on the back of the massive Internet outage on 21st October caused by a DDoS attack on the DNS provider, Dyn. The DDoS attack took down Internet in the entire Mid-West and the Eastern United States leaving users unable to login to websites like Twitter, Spotify, Reddit etc.

The outage may also worry investors as AT&T and Time Warner are merging to form a mega telecommunications company. The United States Justice Department’s antitrust division will analyze the merger deal in the months ahead. The Federal Communications Commission may also take a look. There will be Congressional hearings too.

This is a developing story and we will update it as soon as more news flows in. We have reached out to AT&T and waiting for their comments/statement on this outage.

Also READ > What would happen if the entire Internet went down.