Matthew Harrigan, the President & CEO of PacketSled, has resigned after he posted threats on social media to assassinate President-elect Donald Trump with a sniper rifle. PacketSled, is a San Diego-based cyber-security firm that develops software to detect the origin of cyber-attacks.

“I’m going to kill the president. Elect,” was one of the posts on Harrigan’s Twitter account. It was followed by the comment, “Bring it secret service,” before delving into further detail about just how he planned to take out Trump.

“…getting a sniper rifle and perching myself where it counts,” reads a post to Harrigan’s Facebook account. “Find a bedroom in the whitehouse [sic] that suits you motherf—er. I’ll find you.”

However, Harrigan quickly went on to apologize for his remarks in a statement on PacketSled’s website, toning down the threats merely as a “joke.”

My recent Facebook comment was intended to be a joke, in the context of a larger conversation, and only privately shared as such. Anyone who knows me, knows that I do not engage in this form of rhetoric with any level of seriousness and the comment most certainly does not represent my real personal views in any regard. I apologize if anything that I said was either taken seriously, was offensive, or caused any legitimate concern.

Harrigan’s apologetic statement has since been removed from PacketSled’s website. Instead, the company put up a new post, notifying that the board of directors has “accepted the resignation of President and CEO Matthew Harrigan, effective immediately.”

“We want to be very clear, PacketSled does not condone the comments made by Mr. Harrigan, which do not reflect the views or opinions of the company, its employees, investors or partners,” the statement further said. 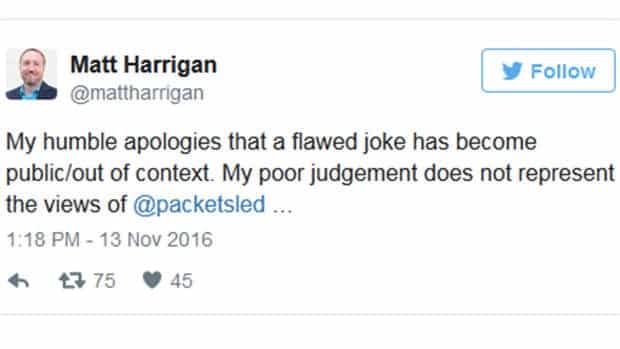 Under the U.S. law, threatening a president- or vice-president-elect is a federal crime. Anyone who “knowingly and willfully threatens to kill, kidnap or inflict bodily harm upon” the president-elect could face a fine and up to five years in prison.