The most awaited Bollywood film of the year ‘Dangal’ starring Aamir Khan, which was released on December 23, 2016, has been leaked on Facebook. However, the video has been pulled down by Facebook now. The movie is based on the life of national champion Mahavir Singh Phogat and his trials and tribulations in training his daughters, Geeta and Babita Phogat, to become world-class wrestlers. 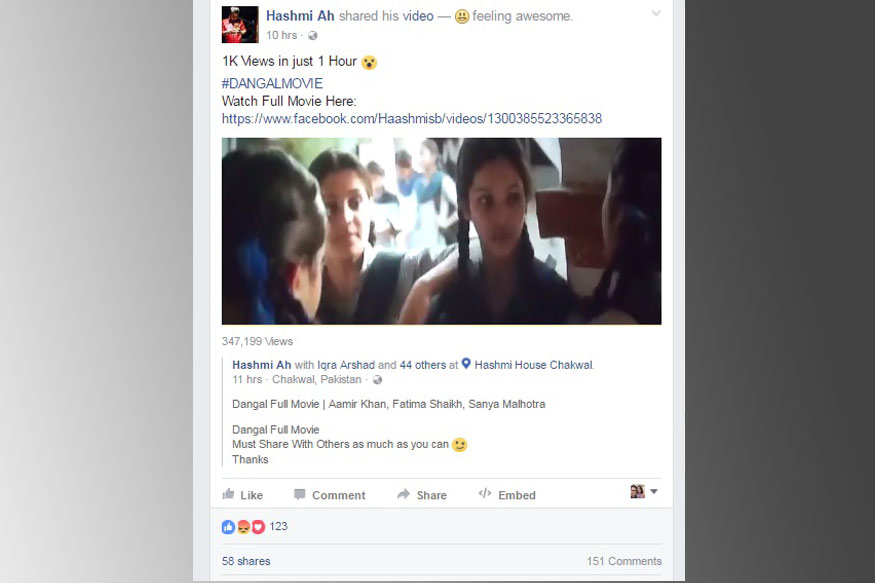 The Facebook user who uploaded the video calls himself ‘Hashmi Ah’ and hails from Islamabad, Pakistan. He is currently living Dubai, United Arab Emirates and working as an importer with Ali Express. Apparently, he leaked the entire Dangal film online in the wee hours of Saturday and managed to accumulate more than 8,33,000 views and over 50 shares before it was deleted due to copyright issues. The user even changed his cover photo on the social media to announce the news to his Facebook friends and followers.

Piracy is one of the biggest evil that is no longer a game that is played on Torrents. The modern age piracy not only plagues filmmakers in today’s day but also causes them heavy losses due to loss of viewership because of the leak. This is not the first time that such a thing has happened on a social media platform.

Earlier this year, the big Mayweather and Pacquiao fight was also live streamed by many viewers on Periscope. After this incident, Periscope made sure that some strict terms and conditions for its users. Also, Bollywood movies like Udta Punjab and the war scene from Baahubali 2 found themselves the victims of online piracy.

Even though the movie has been deleted from Facebook, but the damage may have been done. On the other hand, the biographical sports drama directed by Nitesh Tiwari was loved by the audience in India as well as overseas. The film made a whopping collection of Rs. 29.78 crore in India on its opening day. The movie is expected to do much better weekend during the Christmas weekend. Whether the online leak has hampered the box-office collection of the movie or not, only the coming days will tell.