If you are a gamer, we told you earlier to watch out for this group of hackers who have promised havoc during the oncoming Christmas holidays. Right now they are showing a trailer of what they can achieve. Yes, we are talking about Phantom Squad who have promised to bring down Steam, Sony’s PlayStation and Microsoft’s Xbox down during the week starting today.

And they seemed to have started with Steam today.

The DDoS attack mounted by PhantomNations on Steam servers is so severe that almost all regional gaming servers are down and the report now shows as 0.00 % online. It is worthwhile to remember that Steam operates about 17 regional servers including  3 for US, 4 for Europe and Australia, India, Brazil, Japan etc.  All Steam activities including the Steam community and the Steam Store are down so you cannot buy Steam games as Christmas gifts for your near and dear ones. 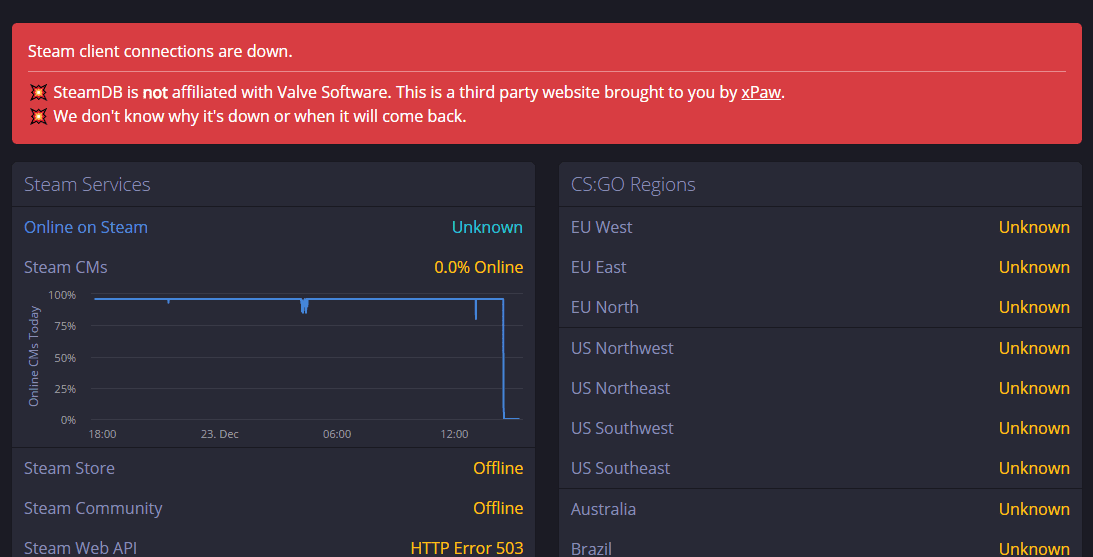 Phantom Squad seems to be playing with thousands of Steam gamers as of now as is explained with this tweet:

The blame for the Steam outage lies solely on Steam developers as the Phantom Squad had warned of such attacks during the busy Christmas season. Even now, Microsoft and Sony should fix their DDoS countermeasures as their Xbox Network and PlayStation Network are likely to be the next targets for Phantom Squad.

DDoSing the gaming servers during the busy Christmas holidays is not new. Lizard Squad did it in 2014 and virtually brought Xbox Network and PlayStation Network to a standstill for a whole week. Last year, PSN and Xbox escaped the ire of hackers but Steam was down for nearly 3 days. This year, Phantom Squad had given an early warning about their intent and even now they are taunting the Steam developers.

Right now most tech websites are linking the Steam outage to the rush due to Steam’s Winter Sale which went live yesterday but we can confirm that this is a mega-DDoS attack on Steam servers.

This is a developing story and we will get you full info about the Phantom Squad’s DDoS attack on Steam servers as it is happening. Sadly for Steam gamers, the attacks on the Steam servers seems to be increasing with passing time and it doesn’t look like they will be having a good Christmas!

Update: Most of the Steam services are back up now