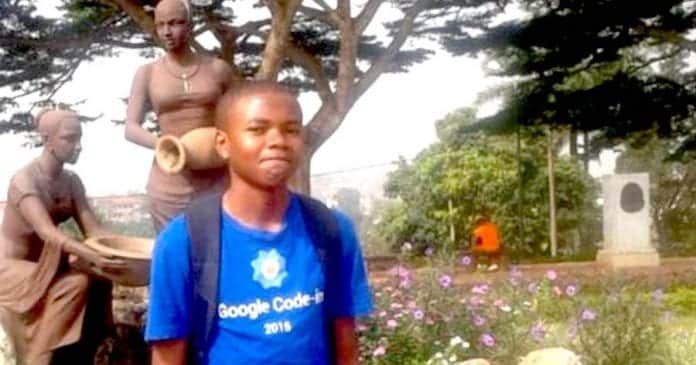 A true champion is one who braces through all adversities and hurdles coming in his or her way. And this 17-year-old African boy is no different!

Nji Collins Gbah, who resides in a small, rural town far outside the capital of Cameroon, is Africa’s first Google Code-in champion. Google Code-in is a contest open to students around the world, aged 13 to 17.

What makes this champion different is that Collins used the knowledge he gained from two years of learning how to code by reading books along with online resource to beat his 1,299 other young adult competitors from around the world who have regular access to wireless networks in order to win the competition.

Collins is from the city of Bamenda in Cameroon’s predominantly Anglophone North-West region that recently fell victim to alleged discriminatory practices from the national government due to political unrest. There has been mounting tension in Cameroon between the country’s Anglophone population—who make up 20 percent of the population—and its French-speaking majority, as English-speakers feel that they are being discriminated against due to partial government practices in favor of the Francophone population.

In response to the protests spearheaded by locals, the government cut off the internet in towns across the area, including Collins’s as a punishment and a blunt tool for holding back dissent. The internet was disconnected just a day after Collins sent in his final submission for the competition, which was uncomfortably close to prevent his success. His hometown has been without internet for nearly a month.

Luckily, by the time entries closed, Collins had completed 20 tasks, covering all five categories set by Google and that too without internet and with no place to study. Due to the on-going protests against English language speakers in the predominantly French speaking nation, his school had shut down. Also, there was no wireless connection at home.

Later, Collins received some unexpected news of him being chosen as one of Google’s 34 grand prize winners.

“I was really, really amazed,” he told the BBC. “It meant my hard work writing a lot of code had really paid off.”

In order to stay on top of the game to win the big prize, Collins chose to travel almost eight hours to the capital, Yaounde.

“I wanted to get a connection so I could continue studying and keep in touch with Google,” he says.

As part of his prize from Google, the young winner received a four day trip to Google’s headquarters in Silicon Valley, where he will be meeting its top engineers and gaining insight into one of the world’s most successful enterprises.

“Hopefully I would like to work there one day, if that is possible,” he says.

In the future, Collins hopes to finish school back in Bamenda, and then study computer science in college.

Currently, Collins says he is working hard to develop his knowledge of artificial intelligence, neural networks and deep learning.

“I’m trying to develop my own model for data compression, using deep learning and machine learning,” he says.

His ultimate goal is a “huge step” forward in capabilities for data transfer and storage.