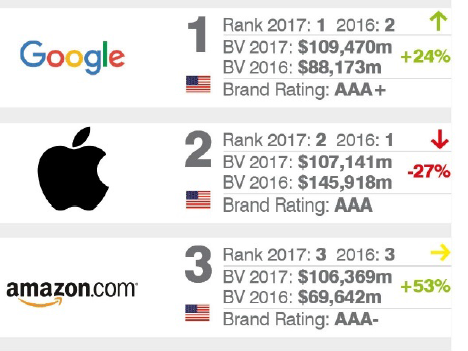 The yearly Global 500 rankings, which calculates the most valuable and powerful brands across the globe, found that the search engine’s brand value rose 24 percent to $109.5 billion in this year’s report, from $88.2 billion last year.

The company “enables the world’s biggest brands reach their customers and build their own brand equity (through search and advertising respectively)”, the report said.

“Google remains largely unchallenged in its core search business, which is the mainstay of its advertising income,” which was up 20% in 2016, it added.

On the other hand, Apple’s brand value fell 27 percent to $107.1 billion from $145.9 billion in the 2016 report; thus losing its lead as the most valuable brand that it held for five years.

“There are probably 50 or 60 analysts that follow Apple,” said David Haigh, the CEO of Brand Finance. “Some are very bullish, some are very pessimistic. What drives our valuation is consensus. We are reflecting what the market says and the market consensus is that the prospects of future turnover are worse than they were last year or the year before.”

Haigh added: “Apple has struggled to maintain its technological advantage. New iterations of the iPhone have delivered diminishing returns and there are signs that the company has reached a saturation point for its brand.”

The Silicon valley giant lost its ground in 2016 because it failed to innovate at the pace its customers expect, states the report.

“… Apple has over-exploited the goodwill of its customers, it has failed to generate significant revenues from newer products such as the Apple Watch and cannot demonstrate that genuinely innovative technologies desired by consumers are in the pipeline,” Brand Finance wrote. “Its brand has lost its luster and must now compete on an increasingly level playing field not just with traditional rival Samsung, but a slew of Chinese brands such as Huawei and OnePlus in the smartphone market, Apple’s key source of profitability.”

In third place was the online retailer Amazon, which saw a substantial jump of an estimated $36.7 billion in its brand value last year–the single highest gain among major companies — ranking the company third, behind Apple and Google. If the company has another strong year, Brand Finance predicts Amazon could become the world’s most valuable brand in 2018.