GPD Pocket Mini Laptop Up For Pre-Order For $399

GPD, a Hong Kong-based portable gaming company, that has produced a number of handheld Android-based gaming devices, is running a crowdfunding campaign on Indiegogo to fund a device known as the ‘GPD Pocket’. Crowdfunding for the GPD Pocket has already reached past its $200,000 fixed funding goal. 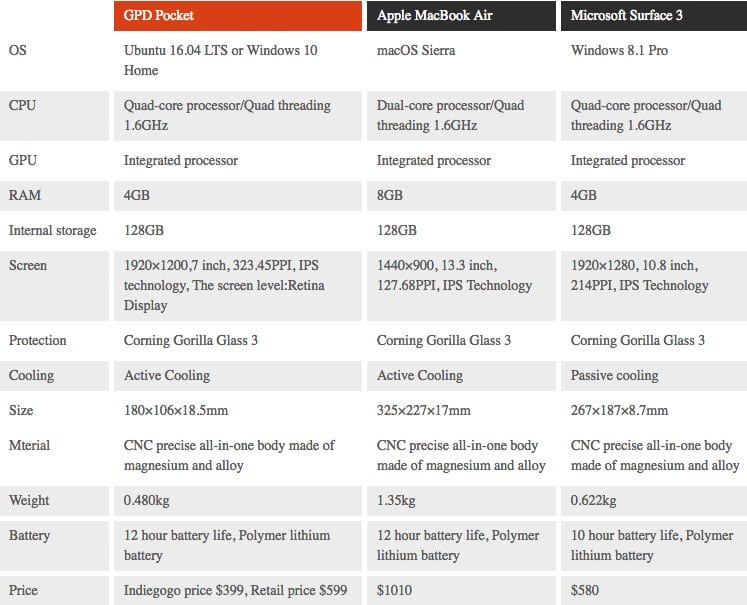 It has an all-in-one body made of magnesium and alloy. There is a fan under the hood to help keep the system cool. It includes a QWERTY keyboard and there is a small pointing stick instead of a trackpad below the keyboard. It measures 180×106×18.5mm and weighs 480 grams. Depending on your preference, the mini laptop is capable of running either Ubuntu 16.04 or Microsoft’s latest Windows 10 operating system. It also comes with 7,000 mAh battery, which gives an estimated battery life of 12 hours.

GPD offers models with Windows 10 or Ubuntu 16.04 Linux at $399 on the company’s Indiegogo crowdfunding page, which is a $200 discount over the planned retail price of $599. The first batches of devices are expected to ship in June 2017.

For more information on the GDP pocket, you can go to the company’s Indiegogo campaign page.