Ettv and EtHd to continue despite Extratorrent shutting down permanently

This week, the torrent community received a major earthquake when the decade old torrent site – ExtraTorrent – threw in the towel. The move happened without an apparent reason with ExtraTorrent operator SaM simply stating that “it’s time we say goodbye.” However, the silver lining to this story is that the community has managed to absorb the jolt and move on.

Migration of the masses

A few days after the news broke, things have begun to settle with the users of ExtraTorrent migrating over to other sites with The Pirate Bay, Torrentz2 and RARBG reporting a significant increase in their users. What has also been confirmed – definitely allaying a lot of people’s fears – is that many prominent uploaders and uploader groups were not going down with the site.

This past Thursday, some time after the site was shut down, ExtraTorrent operator SaM said that the movie torrent distribution group ETRG would also be shutting shop for good. At the same time, it was also mentioned that this might not have to be the case for every uploader.

“Ettv and Ethd could remain operational if they get enough donations to sustain the expenses and if the people handling it [are] ready to keep going,” SaM said.

And true to the hopes of the masses, these groups have uploaded a host of torrents on other torrent sites keeping the ET spirit alive. A host of torrents have been seen on The Pirate Bay (see screenshot below ) signalling a migration of the uploaders alongside the users. Another popular uploader DDR, has also been confirmed to be continuing to upload torrents. This uploader will be using the  ‘SaM’ accounts at The Pirate Bay and 1337x to keep the show going. 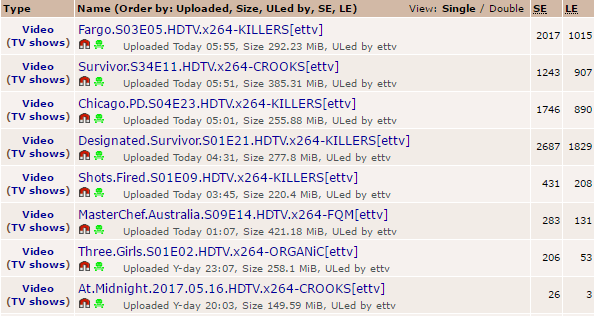 ExtraTorrent’s legacy though will continue to live on in the form of ExtraImage – an image hosting site that was the hosting service of choice for many an uploader & is still living on unabated. A sad news though will accompany the positivity.  ET’s in-house encoder FUM, known for regular high-quality TV releases, will also reportedly stop functioning.

The full impact of the surprise shutdown will be seen in the coming few days. While a major community was shut down this week with a host of uploaders loosing their base, this incident – like many shut downs before it has proven the resilience of the torrent community.