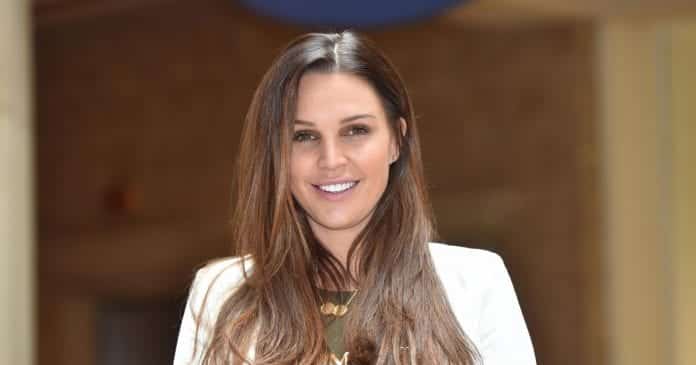 After a lull of almost 2 months, the Fappening 2.0 is back and with a bang. Unknown hackers hacked into the iCloud account of British supermodel Danielle Lloyd and leaked her explicit images. The British model, who is pregnant with her fourth child has officially complained to the police about the hack and the leak.

For those who don’t know Danielle, she is an English glamour model. She is also a former Miss England (2004) and Miss Great Britain (2006), Her first claim to fame is when she was stripped of her Miss Great Britain title after posing nude in the December 2006 edition of Playboy magazine. Her title was reinstated in 2010 after a public outcry.33-year-old’s iCloud was hacked.

In her police complaint, the 33-year-old supermodel has said that hackers hacked into her private iCloud album and then went on to leak some private and explicit images. Of the eight, six pictures feature Danielle naked, and there is one in which she is seen wearing just a top. Others include her in a cut-out swimsuit and posing in the bath. It is apparent that the hackers may possess even more images which they may leak at a later date.

Danielle’s  spokesperson told the gossip website, The Sun that she reported the distribution and violation of her private images to the police. Subsequently, she also filed a DMCA complaint against a website that published her leaked pictures and had them taken down.

“These images are from her private phone and are for private and personal usage only. Police are investigating how these images were taken from her private and personal iCloud – seemingly from a Jihad website who Danielle has been the victim of and terrorised by for some time. We are currently taking steps to prosecute anybody that shares these online,” the representative told The Sun.

Danielle tweeted “The people hacking and releasing pics are scum but those searching them out and spreading them are as bad, if not worse,” after the leaks went public.