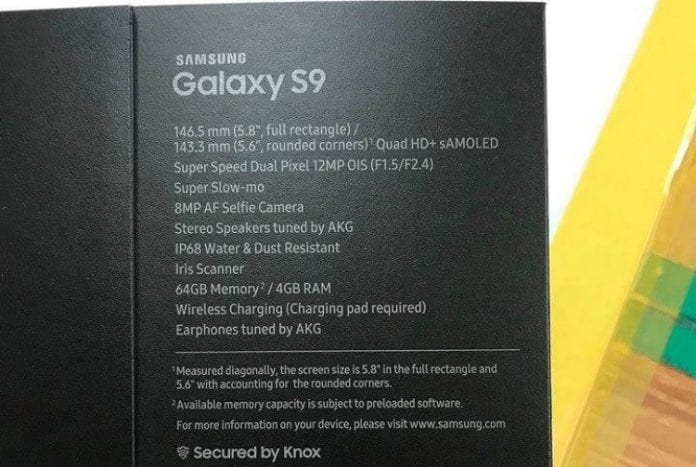 Samsung recently confirmed that it would be announcing its most awaited smartphone of 2018, Galaxy S9 in late February next month during the Mobile World Congress (MWC) 2018 in Barcelona, as opposed to speculations of it being unveiled at the Consumer Electronics Show (CES) this January.

Now, an image of what is alleged to be the Galaxy S9 retail box was leaked by a Vietnamese website called Netnews, which has already been posted on Reddit. According to the packaging of the retail box, the Galaxy S9 will have a 5.8-inch 1440p Quad HD+ Super AMOLED display. It is said to feature a Super Speed Dual Pixel 12-megapixel rear camera with optical image stabilization (OIS). It will have two apertures: f/1.5 and f/2.4, suggesting that the camera could switch apertures depending on lighting conditions. It comes with ‘Super Slow-Mo,’ which likely refers to something similar to Sony’s 960fps slow-motion capabilities.

Also, included in this leaked spec list is an 8MP camera front camera, 64GB of storage, 4GB of RAM, IP68 water and dust resistance, an iris scanner, and wireless charging support. The handset’s stereo speakers are tuned by AKG and will come with a pair of AKG earphones. The Samsung S9 is also expected to come packed with an unlocked FM radio chip at least for North America, monetizing on its partnership with NextRadio.

It is also rumored that Samsung will use a Qualcomm Snapdragon SDM845 processor. However, depending on the market and release timing, it is likely that the company may use the new Exynos 9810 chip.

We cannot confirm whether or not the packaging of the leaked retail box is 100 percent accurate, therefore, we request to take all of this information with a pinch of salt. However, with MWC 2018 already closing in, it seems very plausible that Samsung has already finalized the features of the Galaxy S9 and the box that it will ship in.