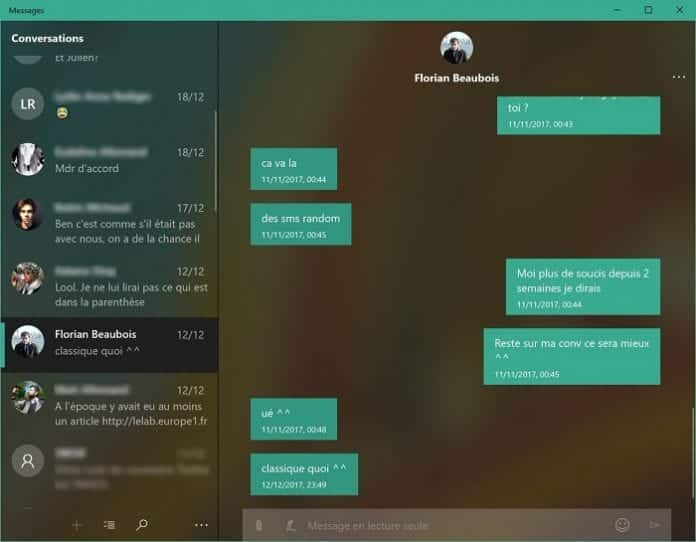 The latest Windows 10 PC Insider Preview build 17074 for Insiders released recently in the Fast and Skip Ahead rings has an updated version of Microsoft Messaging app (3.36.14001.0) with Fluent Design.

This is the first major refresh for UI (user interface) of Windows Operating System as per Microsoft’s latest Fluent design guidelines. It is suspected that the update could likely be related to the upcoming Always Connected PCs and long rumored Andromeda device (also referred to as the Surface Phone) that will run on Windows 10 S and have LTE connectivity would require a desktop messaging app.

The built-in messaging app’s user interface (UI) now includes Acrylic blur and Reveal effects that are part of the Fluent Design System, which was announced by Microsoft back in May 2017.

Fluent Design is based on five key components: Light, Depth, Motion, Material, and Scale. The visual effect of the design language can be noticed only when users hover the cursor on the menu. By implementing the Fluent Design in the Messaging app, it improves the overall experience. However, the app still misses some important features.

“The new Reveal Highlight behaviour is an interaction visualization that helps guide users. Reveal is now enabled by default on ListView and other XAML collection controls in experiences that target the Fall Creators Update,” the company said.

Earlier last year, Microsoft had revealed Fluent Design System alongside the Fall Creators Update. Around three months ago, initial implementations of this system were observed with the release of the Fall Creators Update. Microsoft’s upcoming feature updates, Redstone 4 and Redstone 5 are too expected to include even more Fluent Design additions in 2018.

As of yet, the update hasn’t been rolled out for Windows 10 Mobile.