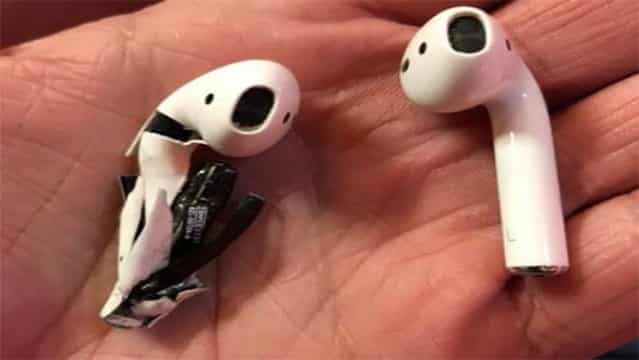 A man in Florida was taken aback when his AirPods started to malfunction and releasing smoke while he was at the gym this week.

According to Jason Colon from Tampa, Florida, he was listening to music while working out at the LA Fitness on 4th Street in St. Petersburg, Fla. on Thursday when he noticed white smoke coming out from his Apple Airpods.

He then left the AirPods on a piece of gym equipment to seek help. Although, Colon didn’t actually see his AirPod burst into flame, he claims that by the time he got back, his right side AirPod had popped open leaving it charred with parts of white plastic turning grey. However, the left side of the AirPod was left unharmed.

“It was already like this. It was already popped. I didn’t see it happen, but I mean it was already fried! You can see flame damage…I don’t know what would’ve happened to my ear, but I’m sure since it hangs down, it could’ve been [my[ ear lobe. Ear lobe could’ve been burnt,” Colon told local television station WFLA TV.

While Colon said the incident was the “craziest thing I’ve ever went through,” he is relieved that he was able to remove the headphones from his ear in time before they exploded.

Colon believes that the battery could be the cause of the problem. He warns other users to be careful while using AirPods. He said, “Just because it happens to me doesn’t mean it won’t happen again.”

This is the first report of explosion involving Apple’s AirPods, hence it appears to be one-off incident.

According to an Apple spokesperson, Apple is investigating the incident and will reach out to Colon to figure out what happened.