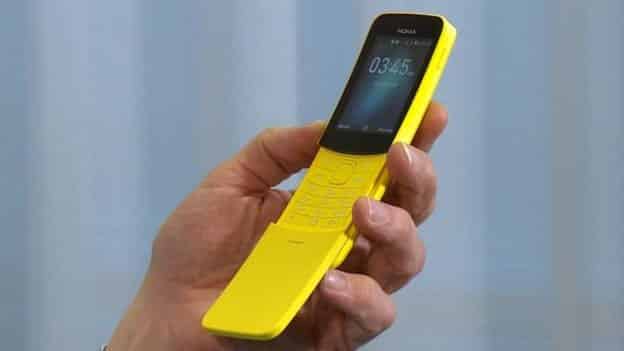 HMD Global, the Finnish manufacturer with exclusive rights to the Nokia brand, created quite a stir in the market last year when it successfully relaunched the iconic Nokia 3310 in a different avatar.

Pekka Rantala, EVP, and CMO of HMD Global said: “This gives us a responsibility to innovate in this part of the business, to bring something new to consider in feature phones going forward. It was very clear that we needed to be able to deliver and keep the Nokia promise when it comes to quality, reliability and ease of use.”

The revamped “Nokia 8110” unveiled at the Nokia Mobile launch event at the Mobile World Congress (MWC) 2018 in Barcelona, Spain is essentially a feature phone that is slightly curved and has a slider that allows you to answer and reject calls. It sports a 2.4-inch QVGA display, has a low-end Qualcomm 205 dual core processor, 512MB of RAM, 4GB of internal storage that cannot be expanded. It also features a 2MP rear camera with an LED flash and is powered by a non-removable Li-Ion 1,500mAh battery. The handset has an IP52 rating for dust and water resistance.

Analyst Ben Wood from CCS Insight said: “In a sea of smartphone sameness it is little surprise that consumers get excited by a little bit of nostalgia. It’s a smart move by HMD Global to add to its retro line with the addition of the new 8110. The 3110 was a huge success last year and helped return the Nokia brand to consumers’ consciousness in a spectacular manner.

“Given the 8110 is another phone that is fondly remembered, particularly because of its appearance in The Matrix films, HMD Global will be hoping it will have a similarly positive effect on the awareness of Nokia branded phones.”