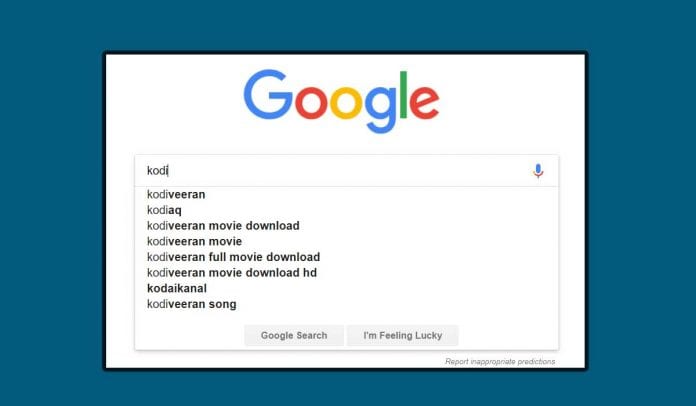 Google now makes it harder for people to search for “Kodi”

In recent years, Google has made several changes to its search algorithms to make the copyright-infringing material less accessible after entertainment industry groups repeatedly insisted the search giant to tighten its anti-piracy efforts.

Google has now added “Kodi” to its autocomplete piracy filter of the search engine, as it is viewed as being “closely associated with copyright infringement”, reports TorrentFreak.

For those unaware, Kodi works as a centralized, legal, open source media center that allows you to access all of your digital audio, movies, TV shows, music collection and photo library from a single, convenient place, whenever and wherever you are. However, its support for third-party add-ons, including those that allow for illegal streaming of copyrighted content without paying for it, often makes it look illegal.

“Google has taken steps to prevent terms closely associated with piracy from appearing in Autocomplete and Related Search,” the search giant had previously explained. “This is similar to the approach we have taken for a narrow class of terms related to pornography, violence, and hate speech.”

Therefore, Google has removed the term “Kodi” from its autocomplete results. As spotted by TorrentFreak, when someone starts typing in “kod” into Google search, they will see suggestions like “kodak”, “kodak black”, “kodaline”, “kodiak”, and pretty much anything apart from Kodi. However, when one types “kodi” with a space afterward, options like “kodi addons” and “kodi download” appear. Similarly, when typing “addons for k”, Google suggests addons for Kokotime, addons for krypton 17.6(A Kodi build!) and addons for kronos wow.

When asked about its latest decision to remove Kodi, a Google spokesperson told TorrentFreak, “Since 2011, we have been filtering certain terms closely associated with copyright infringement from Google Autocomplete. This action is consistent with that long-standing strategy.”

The Kodi team, operated by the XBMC Foundation, is not impressed with Google’s move. “We are surprised and disappointed to discover Kodi has been removed from autocomplete, as Kodi is perfectly legal to open source software,” Nathan Betzen, the president of the XBMC Foundation said. “We have a professional relationship with the MPAA, who have specifically made clear in the past their own position that Kodi is legal software. We hope Google will reconsider this decision in the future, or at a minimum limit their removal to search terms where the legality is actually in dispute.”

Despite, the Kodi team actively making efforts to distance itself from piracy by issuing trademark takedown notices to those selling piracy-configured Kodi boxes, has not helped them in case of Google. In the past, Google has removed terms like pirate bay, BitTorrent, and uTorrent from the autocomplete results.