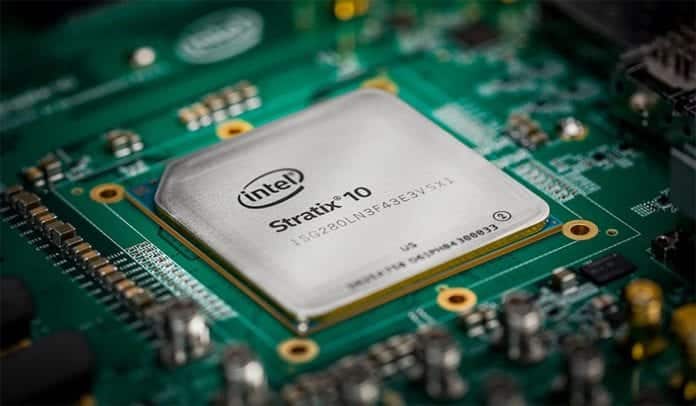 Stratix 10 Is The Fastest Chip Of Its Kind In The World, Says Intel

Intel Inc., in a recent newsroom post, announced that their new chip on the block, Stratix 10, is capable of performing 10 trillion floating point operations per second (TFLOPS). The chipmaker boasted that it is “the fastest chip of its kind in the world”.

For those unaware, Intel had launched Stratix 10 TX field-programmable gate array (FPGA) – the first device of its kind to feature 58 Gigabit PAM4 (or 4-level Pulse Amplitude Modulation) transceiver technology. FPGAs are semiconductor devices that are based on a matrix of configurable logic blocks (CLBs) connected via programmable interconnect. It can provide up to 144 transceiver lanes with serial data rates of 1 to 58 Gbps. It has been developed using 14nm FinFET manufacturing process and EMIB packaging technology.

Intel describes how FPGAs, “are a special class of computer chip that is surging in importance with the rise of applications like speech-recognition, artificial intelligence, next-generation wireless networks, advanced search engines and high-performance computing.” These FPGAs are different from standard CPUs, as they can be customized or re-programmed on the fly to perform highly specialized computing tasks.

The Stratix 10 has around 30 billion transistors, which is more than three times the number of transistors in the chips that run today’s fastest laptops and desktops. It can process the data equivalent to 420 Blu-ray Discs in just one second, states the Intel blog.

“With Stratix 10 TX FPGAs, Intel continues to provide architects with higher transceiver bandwidth and hardened IP to address the insatiable demand for faster and higher-density connectivity.”