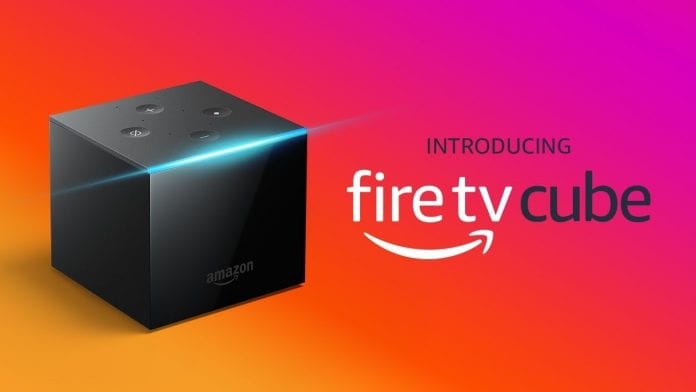 Amazon, the e-commerce giant on Thursday announced a new cube-shaped device that is a combination of combination of an Echo, streaming box and universal remote in one.

Dubbed as the Amazon Fire TV Cube, it allows you to control your TV and other home-entertainment devices by using just your voice. Thanks to a built-in speaker and far-field voice detection, the Fire TV Cube can do just about everything.

“Power your TV on and off, change the volume, switch to different inputs and change the cable channel — all with just your voice,” Amazon said in a statement.

The Fire TV Cube connects to your TV and acts as a 4K Ultra HD streaming media player that allows access to content from Amazon Prime services, Hulu, Netflix and other apps. It also serves as an Echo speaker, which means you can ask it to show weather forecasts on the TV, or order things from Amazon, or make a phone call or show footage from your smart home camera or control smart appliances inside your home.

“Even with the tv off, say “Alexa, play Billions on Showtime” and Fire TV Cube powers on your TV and starts playback right where you left off,” Amazon added.

Similar to Amazon Echo, the Fire TV Cube uses far-field voice recognition and eight microphones, to ensure that the device can hear a user’s commands even from across the room.

“It ‘suppresses’ noise and competing for speech to make sure ‘Alexa clearly hears your request, even next to your TV,’” Amazon said.

Thanks to a combination of infrared technology and HDMI CEC, the Fire TV Cube can be used to control your TV, sound bar, cable box, or other audio and video gear using voice commands.

The Fire TV Cube is compatible with set-top providers including Comcast, Dish, and DirecTV. It also allows access to thousands of apps from the Amazon App Store, such as streaming services HBO, Showtime, and Starz — through Amazon’s a la carte Amazon Channels service.

“We believe voice makes it easier for customers to control their entertainment systems and watch the TV and movies they care about,” Marc Whitten, vice president of Amazon’s Fire TV division, said in a statement. “And it’s just the beginning. Amazon Fire TV Cube will only get better over time, with the Alexa service always getting smarter.”

The Fire TV Cube is available for pre-orders costing $119.99, and will begin shipping June 21. Currently, it’s available only in the U.S. However, Prime members can grab the streaming device for a limited price of $89.99, if the order is placed through June 8th. Also, customers who buy and register their Fire TV Cube by July 1st will receive a $10 credit for Prime Video.