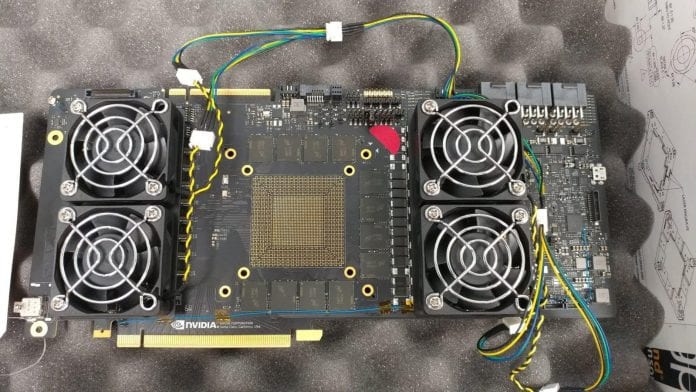 A new leaked image of a prototype version of NVIDIA’s next-generation graphics card has found its way to Reddit (via Videocardz) . The image was posted on Reddit by user ‘dustinbrooks’ who claimed his “buddy works for a company that is testing Nvidia boards and this is apparently their new line up”.

The very first picture of NVIDIA’s GDDR6-based graphics card indicate that the GPU in the center of the board is missing, which suggest that the board in question is designed to support a next-gen Nvidia GPU. Although the prototype lacks a GPU, it does feature 12GB of VRAMs from Micron, a 384-bit memory bus, three 8-pin PCIe power connectors, a second generation NVLINK connector and a huge VRM setup with four fans. The memory bandwidth at 14 GBps data rate suggest that this card has a total memory bandwidth of 672 GBps, which is much more than any consumer grade GeForce graphics card available right now. There is also a mini-DP connector on the bottom left of the PCB.

Given how NVIDIA recently tweeted about Alan Turing’s birthday, this graphics card may very well be suited for a GPU based on the Turing architecture. However, its worth noting that it is a prototype board and not a finished product, which means the specifications and hardware could undergo changes until the official product is ready. Keep watching this space for more updates!!!