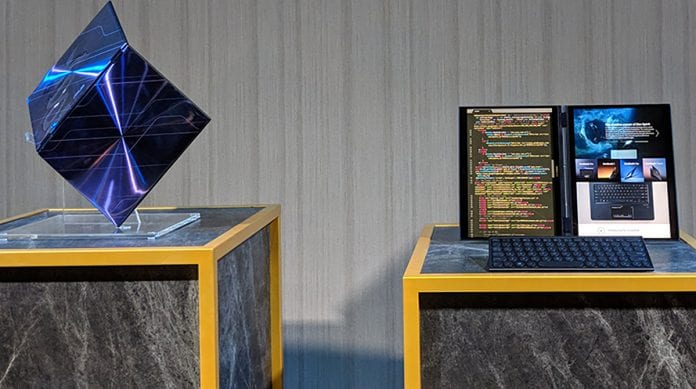 After revealing the ROG (Republic of Gamers) Phone at Computex 2018 in Taipei, the Taiwanese tech company ASUS concluded its conference with the unveiling of its Project Precog concept computer, a dual-screen PC with AI (artificial intelligence) features.

#ProjectPreCog is nothing short of incredible. We had to jostle for a space to take photos of today's #Computex2018 super star. It's sooo shiny and super lit! ?? How's that for #CreativePower? pic.twitter.com/ioBtYPWDBx

While the Precog PC looks similar to the next generation of Lenovo’s Yoga Book, ASUS says it comes with an entire bunch of AI smarts to go with those futuristic looks. The device comes with the main screen, and the keyboard is replaced with a multipurpose secondary screen.

Project Precog claims to be designed “to provide a smooth and intuitive experience for industry-leading AI technologies.” The concept PC has a virtual keyboard that apparently activates when the user approaches it. It uses Intel’s Movidius visual processing unit to identify where your hands are, and it can anticipate where your fingers will finish over the laptop and automatically adjust the virtual keyboard location. Besides this, whenever it detects a stylus touch on the lower screen, it switches itself to stylus mode.

“Intelligent Touch automatically recognizes the active input device and changes the virtual interface accordingly. It can automatically adjust the keyboard location depending on where the user places their fingertips, or automatically switch to stylus mode when a stylus touches the lower screen,” ASUS said in a press release.

ASUS’s dual-screen laptop is equipped with two touch screens, where the first touch screen is in its normal place and the second one is in place of the keyboard. The Precog PC has a 360-degree hinge that allows the user to switch from laptop mode, book mode, tent mode and flat mode. In laptop mode, the bottom screen simply doubles as a keyboard, while in flat mode, it allows the user to play games on both screens. The second display can be used as a keyboard; however, when an external keyboard is connected, both screens can be used together in portrait mode.

In addition, Precog can reportedly give out things like chart suggestions in the bottom screen if you’re using Excel. The PC can also learn when your meetings are likely to take place, and conserve battery appropriately so that you don’t run out of power at an appropriate moment. It is even compatible with Alexa and Cortana, and allows users to “keep their main tasks in full view while virtual assistants process other tasks on the second screen.”

ASUS says that it has plans on releasing the Precog PC in the consumer market in 2019.