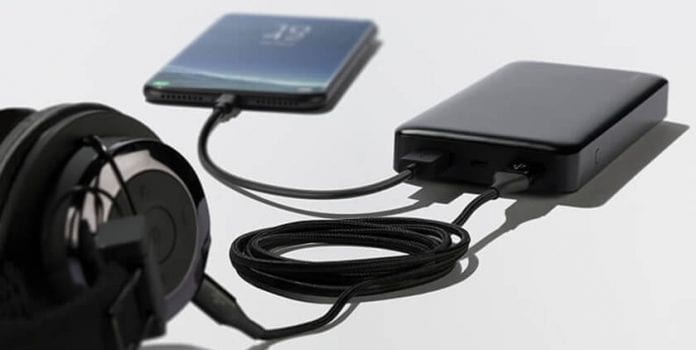 Belkin has just released the first Apple-approved portable power bank with a Lightning port input for charging the battery. This power bank is officially certified under Apple’s MFi licensing program, which assures that the product meets Apple’s standards for quality and compatibility.

According to Belkin, the new power bank is the “first MFi-power bank to recharge via Lightning connector”. The device is marketed directly at iPhone and iPad owners.

Called the BOOST CHARGE Power Bank 10K with Lightning Connector, it offers 10,000 mAh of charging power that can recharged over Apple’s Lightning connector either by using a USB-to-Lightning cable or a compatible Lightning dock, which is sold separately.

The Power Bank 10K features two USB Type-A ports as output, which means you can charge two devices at once. One USB-A port charges at 2.4A, which is for faster charging of iPhones and iPads while the other one is at 1A for slower charging. However, it does not come with USB-C. It also offers a button-activated set of four LEDs on the top of the Power Bank 10K that shows your current battery charge level. If required, you can use the button to toggle between charging input and output modes.

The power bank comes with an over-charging protection for safety as well as an auto-sleep mode to avoid unnecessary power loss. Notably, it does not support pass-through charging. The device measures 154.45 x 71.00 x 17.00 mm and weighs 240 grams. The case is made of plastic polymer and comes with a 2-year warranty. The Power Bank 10K will be available in two color variants: black or white with a two-tone satin and glossy design.

Belkin’s Boost Charge Power Bank 10K with Lightning Connector will cost $59.99 with the product shipping in early August. Currently, the device is available for pre-order from the Belkin website.