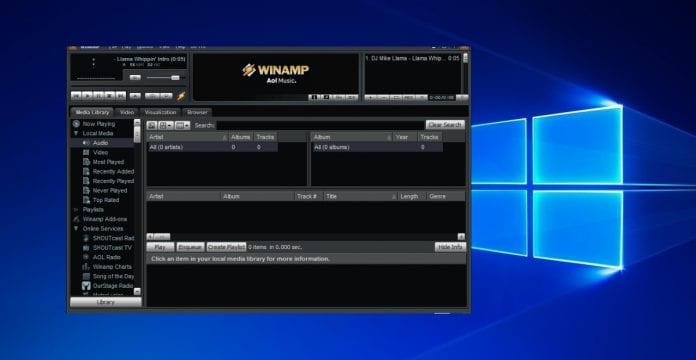 A beta version of the upcoming Winamp 5.8 has been leaked online where it is being distributed heavily.

For those unaware, Winamp is one of the oldest popular MP3 players for Microsoft Windows devices, that supports numerous audio and video formats. Released in 1997, Winamp was originally developed by Justin Frankel and Dmitry Boldyrev by their company Nullsoft, which they later sold to AOL in 1999 for $80 million.

In November 2013, AOL announced that it would be shutting down Winamp.com in December 2013, and the software would no longer be available for download, nor supported by the company after that date. While the shutdown did not take place, but in January 2014, it was announced that Winamp was acquired by Radionomy, owners of the platform to create, discover, and listen-to online radio stations, for an undisclosed sum.

After the acquisition, Radionomy relaunched the Winamp website and made it available for download again. Back then, the company had promised to release a new version of Winamp with numerous features. However, no new stable version has been developed since Radionomy’s acquisition of Winamp in 2014.

Now, more than 4 years later, an anonymous user has uploaded a beta version of Winamp 5.8 media player leaked build that dates back to October 26, 2016. This leaked version also happens to be the first Winamp beta released under Radionomy’s umbrella. There are many change logs of the leaked build that mentions several new features and improvements, including the full compatibility with Windows 10 and Windows 8.1. The changes of the beta version have been listed on a forum post on the official Winamp forum.

Please note that Radionomy has not released the stable version of Winamp 5.8 yet, which means that the .exe uploaded online could contain numerous bugs and may lead to unexpected software crashes.

Hence, it is advisable not to install the media player yet. However, if you still choose to install it, it will be at your own risk and Techworm shall not be responsible for any consequences. You can download the file from here.