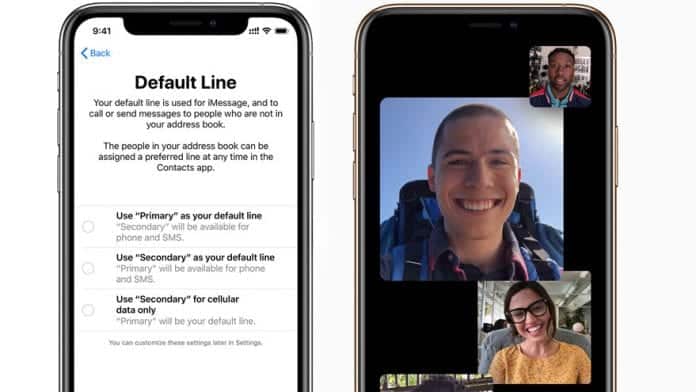 With iOS 12.1, Group FaceTime is easy to use. Chat with more people than ever before. It adds support for video and audio calls with up to 32 participants at one time, with new camera effect features like filters, stickers, Animoji, and Memoji included.

With iOS 12.1, iPhone XS, iPhone XS Max, and iPhone XR are the first iPhones to get Dual SIM support, featuring a nano-SIM and digital eSIM. eSIM is a digital SIM that lets you activate a cellular plan from a carrier without having to use a physical nano-SIM. For more information about setting up Dual SIM, you can visit support.apple.com/en-us/HT209044.

Depth Control in earlier versions of iOS 12 was only available for post-capture editing purposes. The iOS update introduces a new real-time Depth Control feature, for iPhone XS, iPhone XS Max, and iPhone XR that allows you to dynamically adjust the depth of field in real-time preview allowing more control to create portraits with a beautiful background blur.

Portrait mode with Depth Control is also available on the TrueDepth camera for selfies, which includes Memoji and faster face tracking support for third-party ARKit apps.

iOS 12.1 brings over more than 70 new emojis to iPhones and iPads that can be instantly used in messages, emails, and even social media compositions. These include new characters with red hair, gray hair and curly hair, new emoji for bald people, more emotive smiley faces like woozy face, pleading face, and additional emoji representing animals, food to sports and real-life representations.

Other Improvements and Fixes

iOS 12.1 also addresses several bugs and improves performance, which is given below.