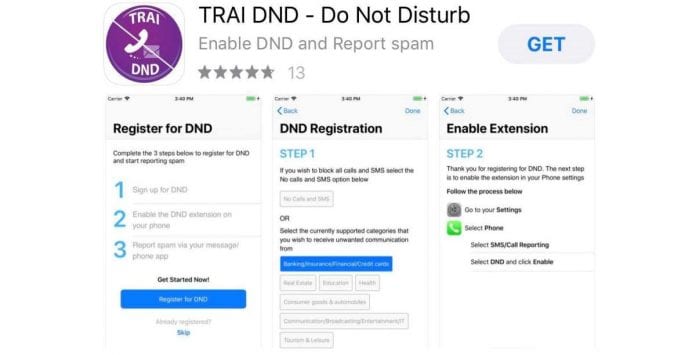 Technology giant Apple’s war with the Telecom Regulatory Authority of India (TRAI) has been going on for some time now over the government-approved Do-Not-Disturb (DND) app.

In July, TRAI had threatened to ban iPhones from the country’s mobile networks, if Apple did not approve the DND app by January 2019.

For those unaware, TRAI has designed the Do-Not-Disturb (DND) app, which allows users to report spam marketing as well as promotional messages and calls. While the app has been available on Android since June 2016, Apple had refused to list it on its App Store citing that the app seeks permission to record user’s calls and messages, which is a breach of user’s data privacy.

Now, Apple has finally and quietly introduced the DND app on its iOS App Store, ending the standoff with the telecommunications regulator of India. The app has gone live in the iOS App Store from yesterday, which was confirmed by an Apple spokesperson in India (via VentureBeat).

Once the user registers his or her mobile number, they can use the app to log complaints of unwanted calls and messages, which will be then sent to TRAI. For reported calls, the TRAI will receive information such as caller’s number and time of the call, and all the contents of the SMS for reported SMS.

The description of the TRAI DND app on the App Store reads as below:

TRAI DND App will help consumers to curb unwanted Telemarketing Calls/SMS by reporting to their respective telecom service provider (TSP). With this App, consumers will be able to:

Note:
Registration of mobile number under DND (Do-Not-Register) will take up to 07 days after putting the request with the respective telecom service provider (TSP).

TRAI DND App will not block any SMS/Calls from authentic businesses/entities that you have subscribed too, e.g your bank, food delivery apps, travel/taxi apps etc. However, the user will be responsible for any loss occurred if they report these Call/SMS.

If you are an iPhone user and wish to download the app, you can click here. In order to install the app, your device should be running the latest version of iOS 12.1.