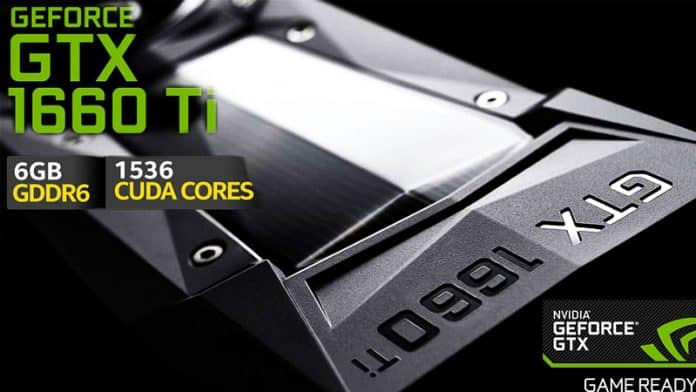 Nvidia launched its latest non-RTX GPU, the GeForce GTX 1660 Ti on Thursday for those PC gamers looking for a budget-friendly option to revive their systems’ languishing performance.

According to Nvidia, the GTX 1660Ti is aimed at those users who are still playing on systems with GeForce GTX 960-levels of performance, or with GPUs slower. Like the GeForce RTX graphics cards, the GTX 1660 Ti features numerous architectural enhancements that accelerate performance, improve efficiency, and deliver a superior gaming experience.

Built on 12th-Gen Turing Architecture, the GeForce GTX 1660 Ti does not feature any Tensor Cores or the RTX cores, which means no ray tracing or DLSS. The GeForce GTX 1660 Ti features 1,536 CUDA cores, 6GB of the new GDDR6 memory running at 12Gbps and a boost clock of almost 1.8 GHz, which can be easily overclocked for further performance. It also features 24 shader modules, 96 texture units, and 48 ROP units.

Nvidia says it also has a power envelope of 120 watts, giving the card “the best performance per watt of any GPU in its class”. It also allows gamers to experience 120 frames per second at 1080p in popular online games such as Fortnite, PUBG, and Apex Legends.

The GTX 1660 Ti also supports Adaptive Shading technology, which boosts framerates by automatically concentrating shading horsepower on areas of the scene that need it the most. As more and more developers integrate Adaptive Shading, the GTX 1660 Ti will get more faster and in turn, increase its lead over previous-generation GPUs. It is also compatible with G-SYNC.

The new chips also have a dedicated hardware encoder that delivers 15% improved efficiency over previous generation graphics cards. It is also optimized for Open Broadcaster Software (OBS) which is the most popular software used by gamers around the world.

Currently, there is no Founders Edition card, which means you only have the OEM options. The GTX 1660 Ti priced at $279 is now available worldwide. It will also be available from the world’s leading add-in card providers, including ASUS, Colorful, EVGA, Gainward, Galaxy, Gigabyte, Innovision 3D, MSI, Palit, PNY and Zotac.