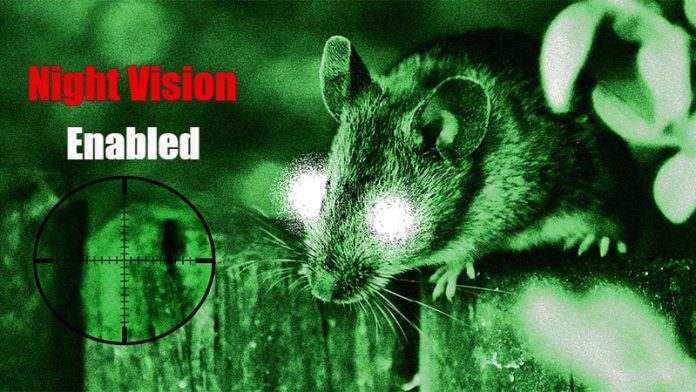 Scientists from the United States and China have developed an injectable nanoparticle that could one day give humans and other mammals the power to see in the dark.

Researchers from the United States and China have created an “ocular nanoparticle” that can detect invisible near-infrared (NIR) light. The nanotechnology works by binding with the retinal cells in the eye that convert light into electric signals.

Prof Gang Han, a biochemist at the University of Massachusetts Medical School, explained: “When light enters the eye and hits the retina, the rods and cones – or photoreceptor cells – absorb the photons with visible light wavelengths and send corresponding electric signals to the brain.

“Because infrared wavelengths are too long to be absorbed by photoreceptors, we are not able to perceive them.”

The experiment was successfully tested on mice who were given a simple injection containing nanoparticles directly into their eyes. After the experiment, the rodents were able to see in the night for as long as 10 weeks with no significant side effects. The rodents were not only able to perceive NIR radiation, but also could distinguish between different shapes in the dark based only on their NIR signals.

After ten weeks, when the particles separated from the photoreceptors, the rodents’ normal vision was still intact. According to scientists, they could make changes to a human’s vision to detect a wider spectrum of colors.

Mice like humans are restricted to seeing a range of wavelengths of light called visible light, which is no longer than 700 nanometres and at the red end of the visible spectrum. But the nanoparticles capture the longer infrared wavelengths and emit shorter wavelengths that retinal cells can detect.

The nearby rod or cone then absorbs the shorter wavelength and sends a normal signal to the brain, as if visible light had hit the retina. This converted light peaks at a wavelength of 535 nanometers, so the mice see infrared light as green.

Neuroscientist Dr. Jin Bao, a member of Prof Xue’s lab, said: “In our experiment, nanoparticles absorbed infrared light around 980 nm (nanometres) in wavelength and converted it into light peaked at 535 nm, which made the infrared light appear as the color green.”

“In our study, we have shown both rods and cones bind these nanoparticles and were activated by the near-infrared light.

“So, we believe this technology will also work in human eyes, not only for generating supervision but also for therapeutic solutions in human red color vision deficits,” said Dr. Xue.

“This is an exciting subject because the technology we made possible here could eventually enable human beings to see beyond our natural capabilities.”

Michael Do, a neuroscientist at Harvard Medical School in Boston, who was not involved with the work, said “This paper is astonishing. To think that you can inject these nanoparticles and have them work is incredible.”