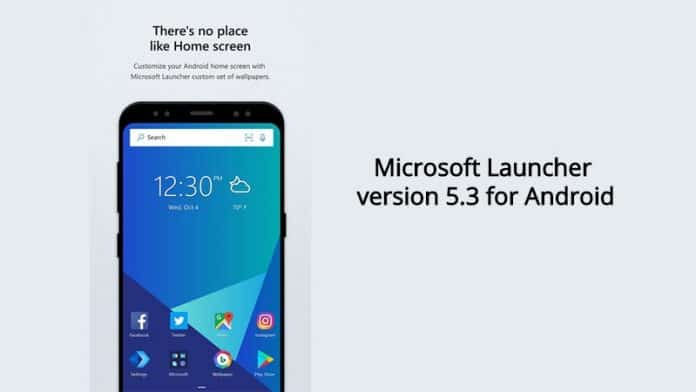 Microsoft Launcher version 5.3 for Android rolls out with a new weather widget, To-Do integration and more

For those unaware, Microsoft Launcher (formerly known as Arrow Launcher) is an application launcher created by Microsoft for the Android OS platform as a lightweight, fast, and efficient simplification of the Android user experience.

Effective yesterday, Microsoft has officially pushed out version 5.3 of Launcher for Android. While the most important change is the redesigned Time/Weather widget, there are also changes such as tasks card support for To-Do’s My Day, flagged e-mails from Outlook, and finetuning on UX fundamental and usability.

Let’s have a look at what’s new in Microsoft Launcher v5.3:

– Time/Weather widget redesign- Now you can have multiple widgets in multiple sizes in multiple styles for multiple locations! Also, check out the updated and more detailed L2 page with hourly and 10-day forecast.
– UX refinements to the Home Screen, Dock and Search widget
– Tasks card now supports “My Day” from Microsoft To Do
– News tab now supports “Technology” as a news interest
– Font type changed from Segoe UI to Roboto
– Work profile customers can now get access to their work apps
– Beta community link in Settings changed to lead to Microsoft Tech Community

With the recent updates to Launcher and its integration with Cortona, To-Do, Office, Windows Timeline, Microsoft News, Bing Rewards, and Sticky Notes makes it the go-to place for those who depend on Microsoft products.

You can download the latest version of Microsoft Launcher 5.3 from the Google Play Store. Alternatively, you can also use that link to join the beta program.