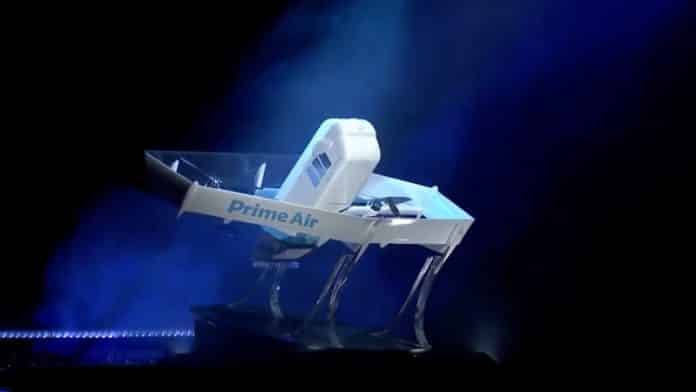 The new hexagon-shaped fully-electric drone can fly up to 15 miles and deliver packages under 5 pounds to customers in less than 30 minutes.

“With the help of our world-class fulfillment and delivery network, we expect to scale Prime Air both quickly and efficiently, delivering packages via drone to customers within months,” said Wilke in a blog post announcing the drone.

Wilke pointed out the new drone design includes advances in efficiency, stability and, most importantly, in safety.

Firstly, hybrid design, which is one key component of the drone allows it to “do vertical takeoffs and landings — like a helicopter.” This means it is efficient and aerodynamic like an airplane and can easily shift from vertical-mode to airplane mode, and back to vertical mode.

Secondly, the drone is beefed up with a surrounding shroud, which makes it safe and efficient in flight. The distinctive aircraft is controlled with six degrees of freedom, compared to four for a normal quadcopter. This makes it more stable, and capable of operating safely in more gusty wind conditions.

The new Prime Air drone employs diverse sensors and advanced algorithms, such as multi-view stereo vision, to detect static objects like a chimney.

Further, the drone uses proprietary computer-vision and machine learning algorithms to detect moving objects, like a paraglider or helicopter.

In addition, the drone needs a small area around the delivery location that is clear of people, animals, or obstacles.

“We determine this using explainable stereo vision in parallel with sophisticated AI algorithms trained to detect people and animals from above,” Wilke said.

Wire detection is one of the hardest challenges for low-altitude flights. “Through the use of computer-vision techniques we’ve invented, our drones can recognize and avoid wires as they descend into, and ascend out of, a customer’s yard,” he explained.

Basically, the company is focusing on building a drone that isn’t just safe, but independently safe, using the latest artificial intelligence (AI) technologies.

Check out the flight test video released by Amazon below.

While it is unclear when or where the Prime Air drones would be tested, Wilke, however, did acknowledge that the company has been in talks with regulators such as the Federal Aviation Administration (FAA).

“We right now do have permission to do testing in a couple of locations in the United States with the FAA,” Wilke said. “But our objective is to have a certified commercial program that allows us to deliver to customers. That’s what we’re working toward, in months.”