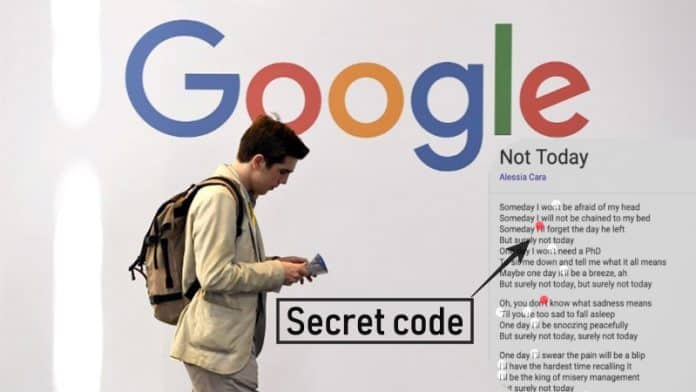 Genius Media Group Inc., an American digital media company that specializes in song lyrics, has accused Google of copying its content to power the Lyrics OneBox on the tech giant’s search engine results page for years without permission.

According to Genius Media, some of the song lyrics displayed in Google’s information boxes are directly picked up from the company’s website.

Genius caught Google “red-handed” after implementing a hidden watermarking system that showed the search company was copying its content. To do this, Genius deliberately used straight and curved apostrophes in the lyrics on its website in order to watermark the lyrics in Morse code to spell out “red-handed”.

This type of watermarking spelled out “red-handed” in Morse code in more than 100 cases where Google’s lyrics included those exact apostrophes.

According to Genius, Google by using lyrics taken from the platform is violating both the company’s terms of service and antitrust law. The company had first notified the search giant of the infringement back in 2017.

However, on the other hand, Google refuted the claims made by Genius stating that it is working with Canadian-based LyricFind Inc., one of the tech firm’s partners, to secure the rights to lyric content.

Google claims that the lyrics displayed in the search results are provided by third-party licensed companies.

“We take data quality and creator rights very seriously and hold our licensing partners accountable to the terms of our agreement,” Google said adding that an investigation is in progress.

“We do not source lyrics from Genius,” clarified LyricFind Chief Executive Darryl Ballantyne.