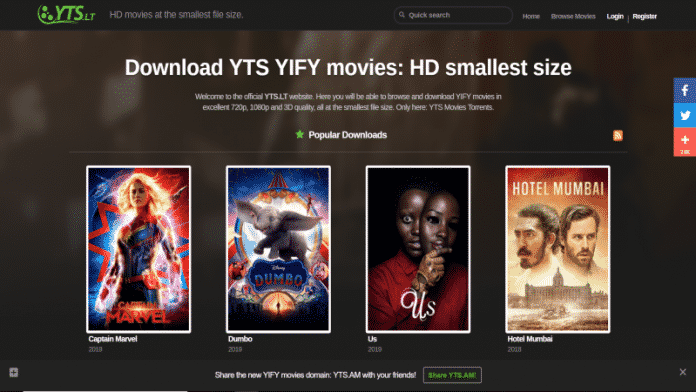 Although there is no public announcement from the site on the change, the old .am domain name is still operational, as it redirects to the new home.

While it is unclear what prompted the sudden move, a recent lawsuit filed by several movie companies last month in the Hawaiian federal court to block torrent websites (YTS.am and YIFYMovies.is) could be the reason behind the change in the domain name.

According to the lawsuit filed, the complainant, which are the companies behind the movies Singularity, Once Upon a Time in Venice, Mechanic: Resurrection, The Hitman’s Bodyguard, I Feel Pretty, Boyka: Undisputed and Hunter Killer, have accused the alleged operators of YIFYMovies.is and YTS.am of encouraging massive copyright infringement as well as contributing to copyright infringement.

The movie companies have specifically requested an injunction to stop third-party intermediaries, including domain registrars, from enabling access to the YTS.ag and YTS.am domains.

For those unaware, the site ‘unofficially’ took over the YTS brand from the original group in 2015, and since has been keeping the YTS and the related YIFY alive and running.

The site was operating from the YTS.ag domain name when it first entered the torrent market. However, two years later, it traded in for YTS.am domain name.

Many ISPs have blocked the older YTS.am and YTS.ag domains around the world. By changing the domain name, the operators are trying to make it accessible to its users at least for now.

Additionally, a new domain makes all search engine results accessible once again that was removed earlier due to takedowns. 23,106 YTS.am domains were removed in recent years, according to Google’s latest data.

Whatever the reason for the domain name change, YTS is available for now. Also, as the old domain automatically redirects users to the new domain, they are unable to find out any difference.