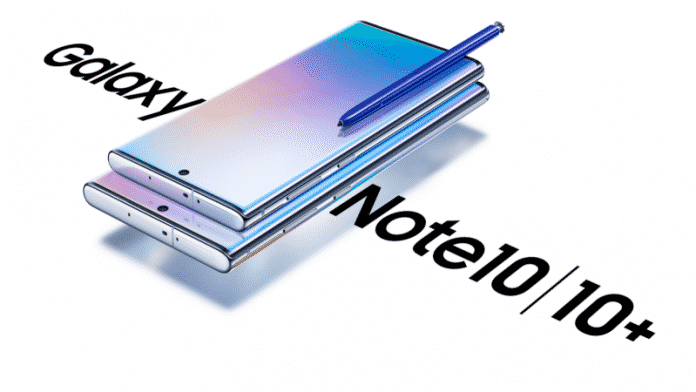 “Every element of Galaxy Note 10 was designed to help users achieve more,” DJ Koh, president and CEO of Samsung’s IT and Mobile Communications Division, said in announcing the smartphone. “Whether they’re finishing a big project for work, capturing and editing a video, or playing their favorite mobile game, the Galaxy Note 10 will help them do it faster and better.”

Both the phones will have squared edges and glass design along with Infinity-O displays that have a punch-hole cut-out for the front-facing camera at the top-center of the screen. Further, they will offer an ultrasonic fingerprint sensor under the display as well. However, both the models will not feature the Bixby button that called up Samsung’s virtual assistant.

The new Galaxy Note handsets will be powered by Samsung’s brand new octa-core Exynos 9825 processor, built using its own 7-nanometer EUV (extreme ultra-violet) silicon manufacturing, which the company claims will deliver 42 percent and 33 percent gains in CPU and GPU performance, respectively. It also comes with Mali-G76 MP12 GPU, an integrated NPU, and allows for 5G, as well as 8K UHD video encoding/decoding.

The Note 10 will come with 8GB of RAM and 256GB of storage with no microSD card slot. However, the Note 10+ will have 12GB of RAM, and either 256GB or 512GB of internal storage that can be further expanded up to 1TB with a microSD card. All versions of the Note 10 will run Android 9.0 Pie.

On the camera front, the Samsung Galaxy Note 10 and Note 10+ will sport triple and quad-camera arrangements respectively, with the Galaxy Note 10 sporting an additional Time-of-Flight (ToF) sensor to capture depth data. Both have a triple-camera setup on the back with a 12 MP main sensor with three-stage variable aperture switching between f/1.5, f/1.8, and f/2.4 They also have a 16 MP ultra-wide-angle camera and 12 MP telephoto sensor.

According to Samsung, these lenses will give a “pro-grade” camera experience to users, with features like Live Video Focus (for easy background blur and DoF adjustments), a “Zoom-In Mic” to focus audio on a specific subject, and an automatic footage stabilizer called “Super steady.”

While the Galaxy Note 10 comes with a 3,500mAh battery, the Note 10+ is powered by a 4,300 mAh battery. Both the phones come with a superfast charging system that can allegedly provide a full day of phone usage on a single 30-minute charge.

The handsets will not include Bluetooth headphones but will ship with a pair of wired AKG earbuds that can be plugged into the phone’s USB-C port. Meanwhile, a USB-C-to-3.5-mm adapter will cost an additional $10.

According to Samsung, about 70% of Note and Galaxy S owners say they use Bluetooth instead of the headphone jack. “One thing we looked at is what people are actually doing on their device. Far and away for Note, people are using Bluetooth audio. The headphone jack just isn’t getting the usage we used to see,” Caleb Slavin, Samsung America’s senior manager of product management told CNet.

The new Note 10 line will ship with Samsung’s new Bluetooth LE-enabled S Pen with a new feature called “Air Gestures.” This will allow you to take pictures remotely, change playlists on Spotify, or control your presentations without actually placing it on the device. It can also convert handwritten notes written with the S Pen stylus to digital text and export it to a variety of formats such as Word or PDF document. The new S Pen sports a better battery that can juice to full in just “minutes”, according to Samsung.

Samsung is also upgrading the DeX experience for PC on the Note 10, where users just need a USB connection to connect the Note 10 to a Windows computer or Mac. This will allow drag-and-drop of files between devices.

Users can connect the Note 10 phones to their Windows 10 PC with a “Link to Windows” feature that allows you to send and receive messages, view notifications, and review recent photos. It also comes with a quick icon on the Quick Panel that allows you to open up Your Phone easily.

The Note 10 and Note 10+ will also feature Samsung’s recently-announced PowerShare technology that allows you to drop your Galaxy Watch, Galaxy Buds, or any other “Qi-enabled device” onto the device’s rear to transfer power between them.

Samsung’s Note 10 will be available in both 5G and LTE options. But the 5G version is only available as a Note 10+ variant, and only to Verizon customers. The regular Note 10 does not come with the 5G version.

The handsets will be available in three different colors: Aura Glow (a combination of blue and white), Aura White and Aura Black. The Note 10 will start shipping on August 23.