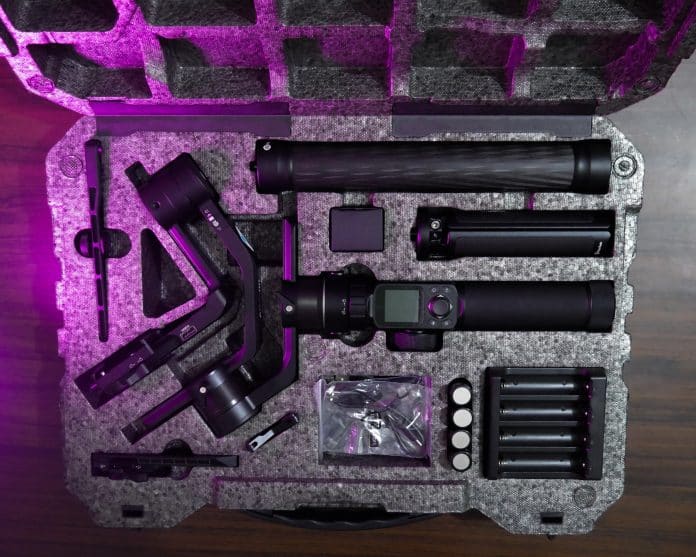 One of the thing that is common among every film or video is Motion. Traditionally, tripods and Steadicam have been used to record motion shots. That said, in recent years a new filmmaking tool namely Gimbal has taken over traditional stabilizers. Well, FeiyuTech has recently launched its new three-axis gimbal called as the FeiyuTech AK4500.

This gimbal is designed for DSLR and mirrorless cameras and it’s dedicated to both professional and aspiring filmmakers. So here’s a detailed review of the FeiyuTech AK4500 that will help you in making the purchasing decision.

FeiyuTech AK4500 is a well-constructed gimbal and it’s made up of aluminum alloys. This gimbal weighs 1656 grams without the battery. Unlike, many other gimbals in the market FeiyuTech AK4500 offers three-axis locks which make the process of mounting cameras and balancing them a breeze. 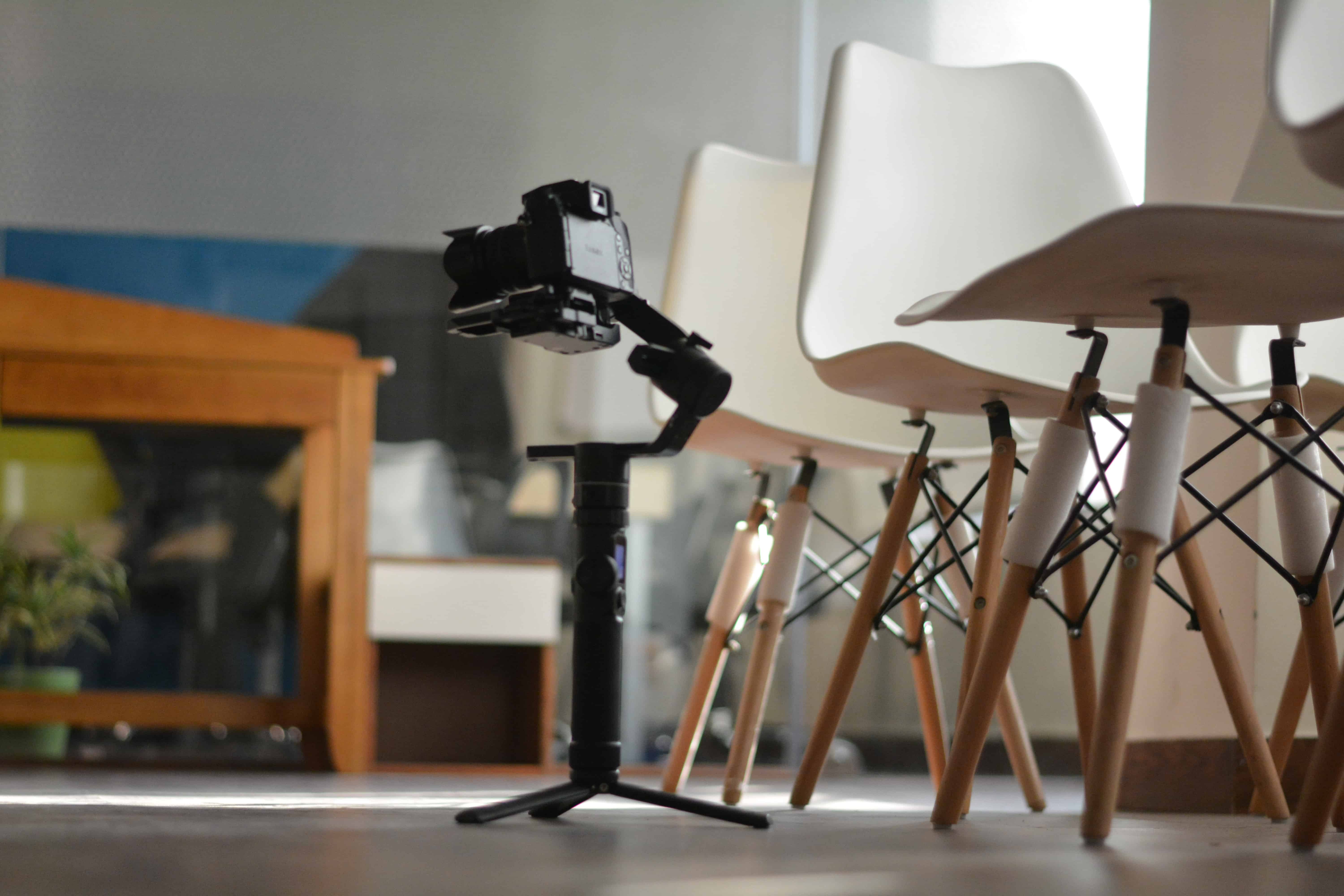 A small tripod attaches to the bottom part of this Gimbal and there’s a carbon fiber extension bar that helps in increasing the height of this gimbal. The touch screen on this gimbal allows users to control all of its functions and modes.

The handgrip of this gimbal is comfortable to hold and FeiyuTech claims that this gimbal has a maximum payload capacity of 10.14lb or 4.6KG. 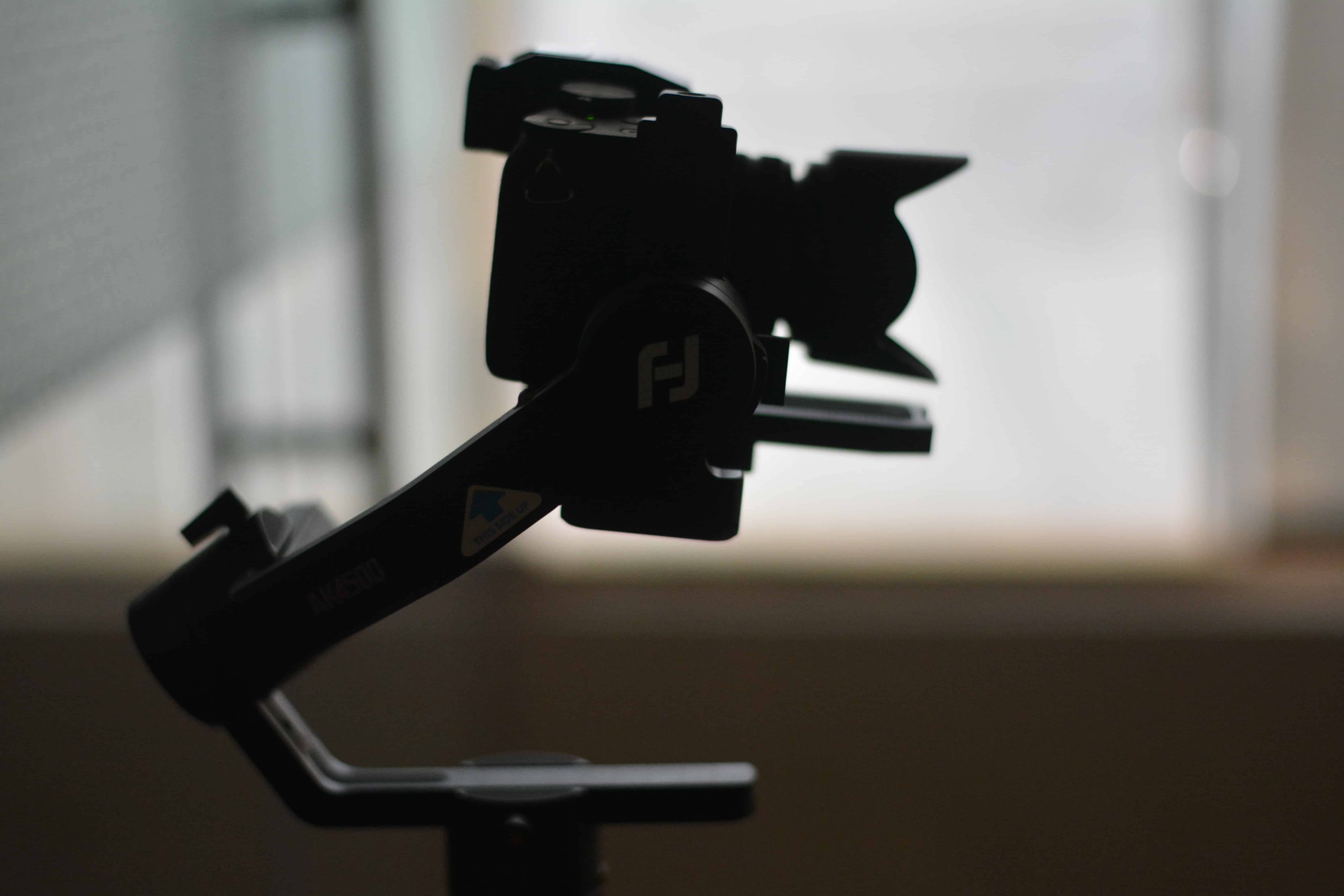 Consequently, you can even mount heavy cameras like BMPCC 4K, Canon 1D X Mark II, Canon C100/C300, and many more. Additionally, mounting compact mirrorless cameras like Panasonic Lumix GH5, Sony ?7/?9 series, Fujifilm X-T3, and many others won’t be an issue. Overall, this gimbal can be used with every mainstream camera. 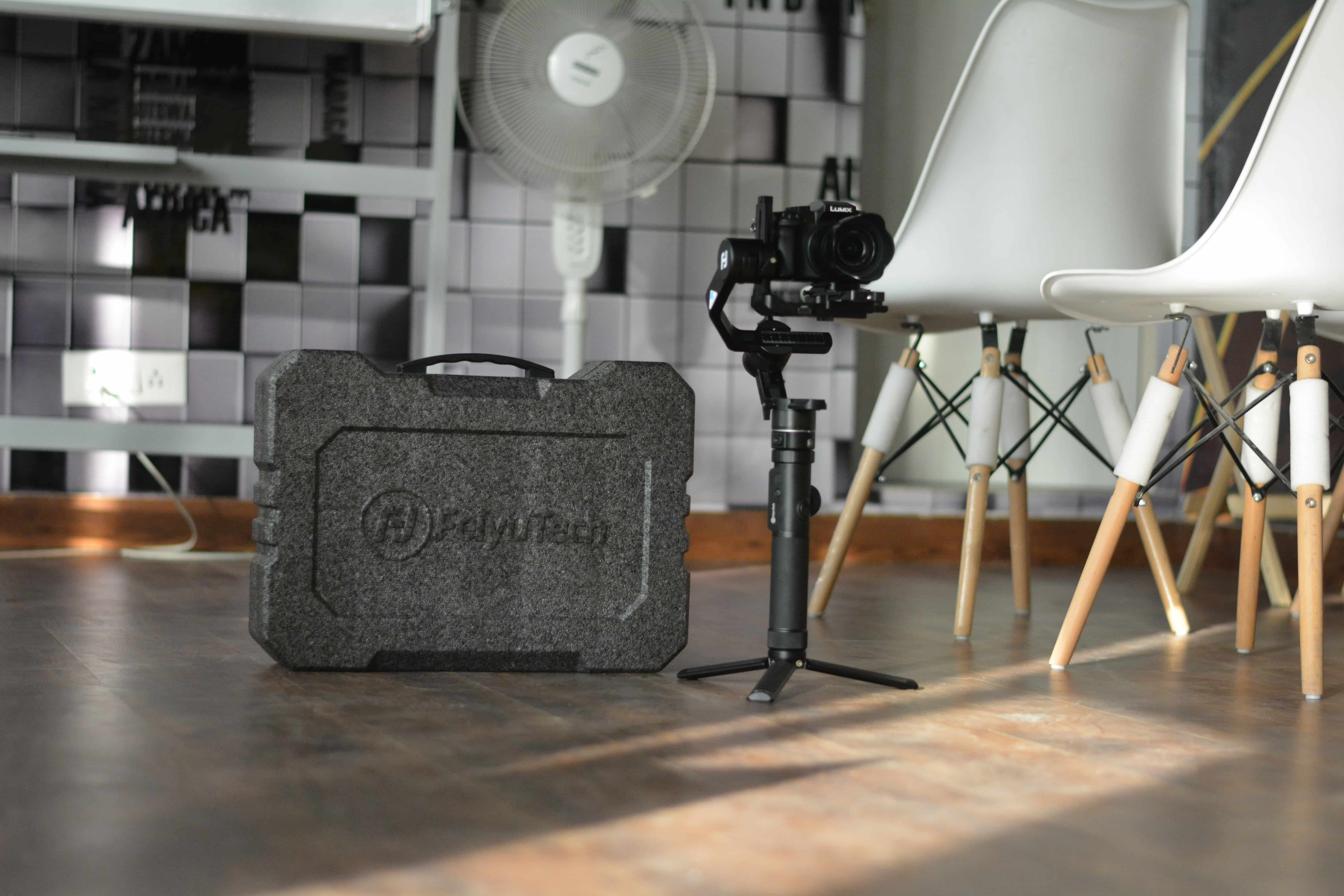 In addition to handheld usage, this gimbal can be used wirelessly either with a remote or with a smartphone. As a result, you can plan and record different types of shots with this gimbal. Feiyutech claims that the battery of this gimbal can last for up to 12 hours of usage. Fortunately, this claim is true as during the testing period I was able to use this gimbal for 10 to 11 hours. It is worth noting that, the camera should be balanced properly else the motors will have to do more work and it will result in poor battery performance.

Lastly, the UI of this gimbal can be operated in either in Chinese or English language. 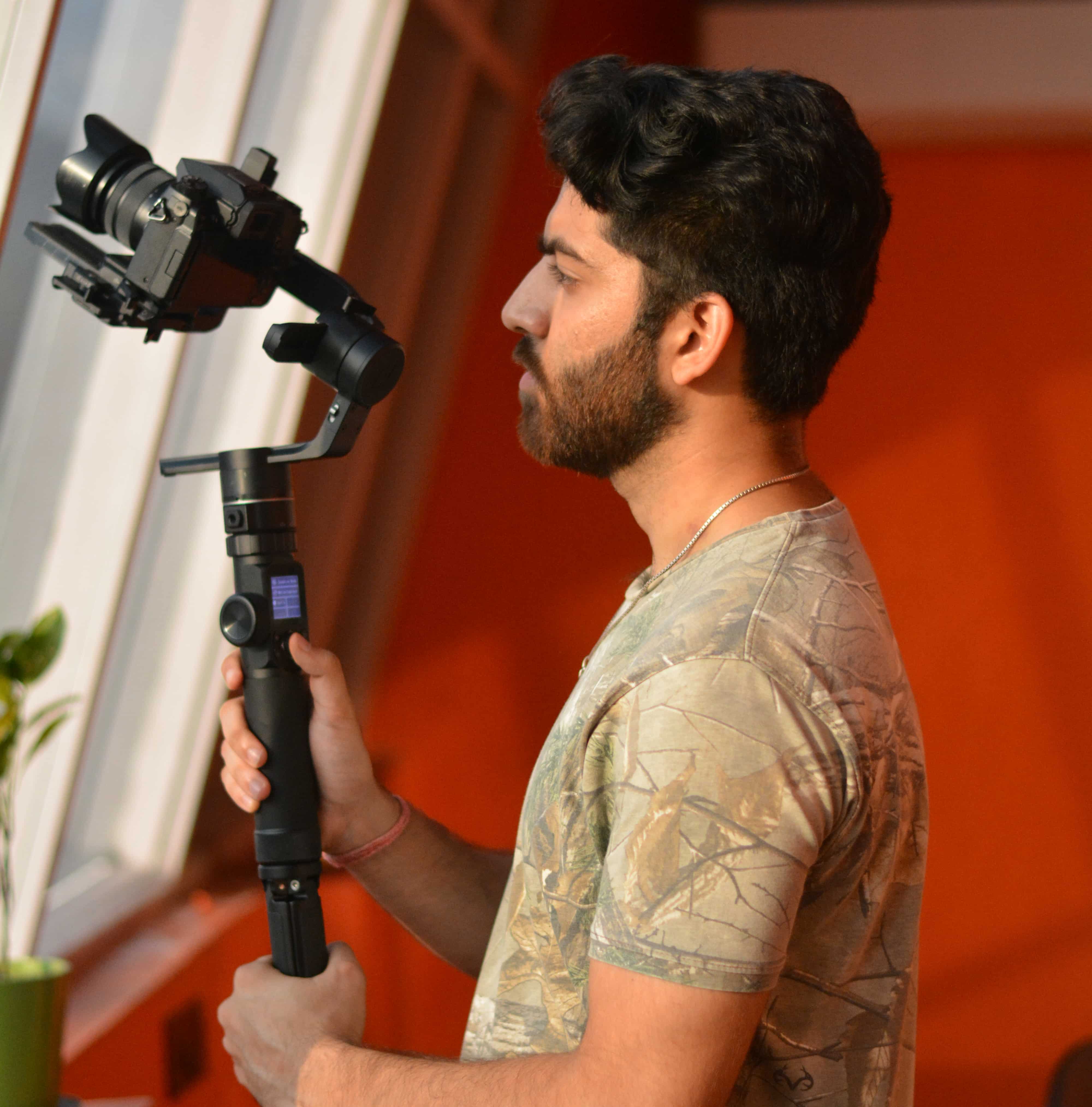 In addition to offering stable footage, FeiyuTech AK4500 offers a plethora of modes to shoot different kind of shots. Furthermore, you can combine different modes to create a new shot. In a nutshell, the possibilities with this gimbal are endless.

The Lock Mode does exactly as its name suggests. It holds the camera in a stable position and the overall orientation of the camera is fixed. You can use the lock mode to record stationary subjects.

Again, the name says it all. Follow mode will help you in recording moving subjects. The camera will follow your motion and slowly pan in the direction of tilting. In follow mode roll direction is fixed, and camera moves according to the left-right movements and up-down movements.

Pan Follow Mode is almost similar to Follow Mode. That said, unlike Follow Mode the roll and tilt direction are fixed in Pan Follow Mode, and the camera moves according to the left-right movements of user’s hand.

In All Follow Mode, all three axes will be free and follow your movement. You can use this mode during run and gun shooting.

360 Rotation is not a dedicated mode but using this mode you can record a complete 360-degree rotation. While recording 360 rotation you have to keep the gimbal in the horizontal position. You can record both clockwise and anti-clockwise rotation. Lastly, combining rotation with forwards or backward motion will give you a more dramatic shot.

The Portrait Mode on this gimbal can be used for shooting smartphone-optimized verticle content. You can use this mode for shooting IGTV or TikTok videos. Similar to the 360 rotation mode, Portrait Mode works well in the horizontal position.

Another interesting mode on the Feiyutech AK4500 is the selfie mode. This mode is dedicated to vloggers. Vlogging with a gimbal will offer you stable footage on the go.

These were some of the most interesting modes on the Feiyutech AK4500 gimbal. In addition to the above-mentioned modes, there are many other modes like timelapse, photo spot and you can even combine different modes to get interesting footage.

Using the mode button you can switch between different modes and the movement can be controlled using the joystick. 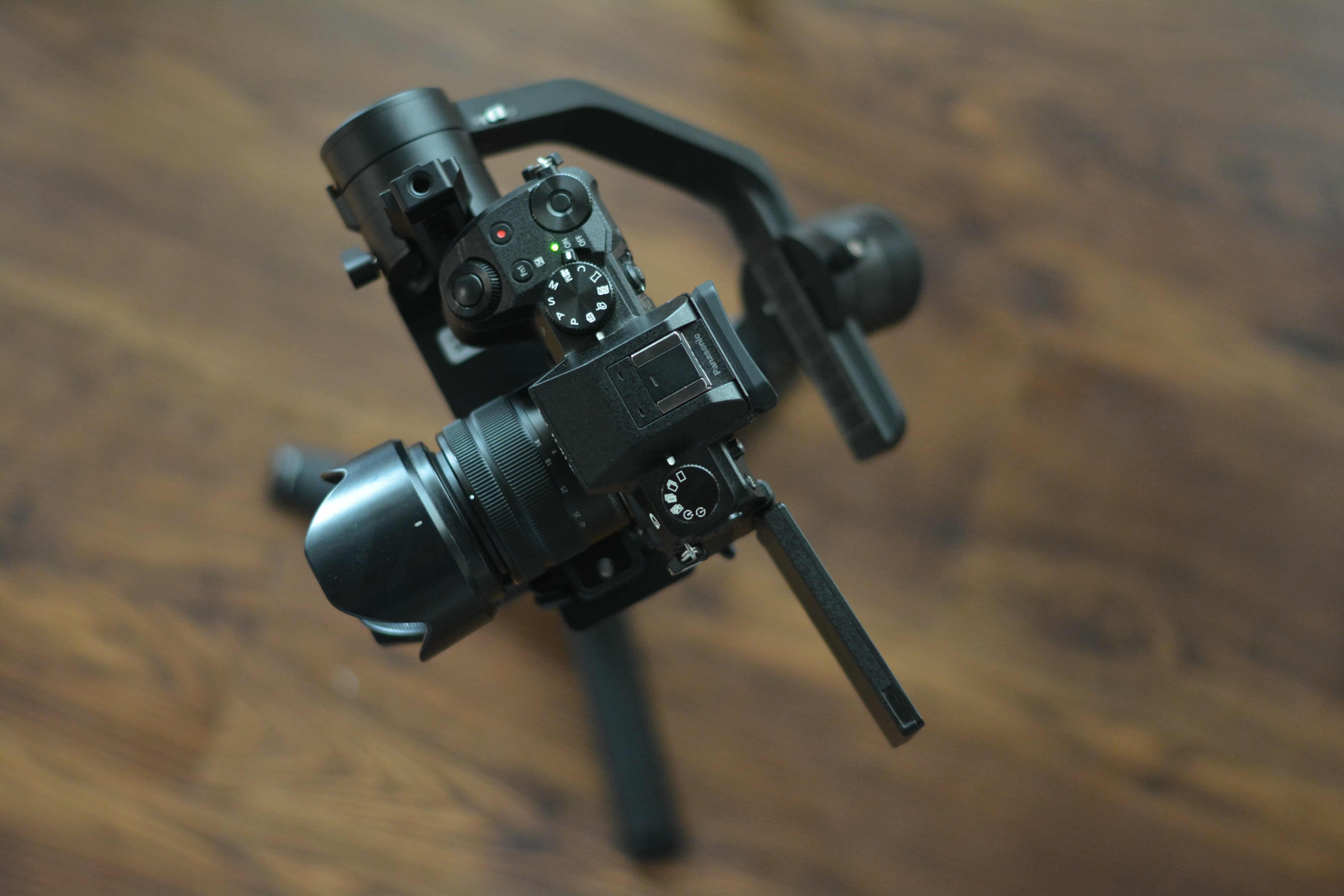 The accessories version of this gimbal comes with many useful items like a wireless remote, focus pulling mechanism, smartphone adapter, and dual handle grip. I would highly recommend getting the accessories version if you are not a one man band. Operating the gimbal with a crew will help you to get much better shots.

The carrying case of this gimbal is also very well constructed and you won’t face any issue in transporting this gimbal.

So shall you buy this gimbal or not? We would highly recommend getting this gimbal if your job revolves around shooting videos. The initial setup of this gimbal might feel a bit frustrating but once you get used to it there won’t be an issue in shooting stable footage. Moreover, we even faced some weird vibrating issues but fortunately they got resolved after updating the software.

Overall it’s a great gimbal for the price and the best thing about it is its high max payload capacity and the number of modes it offers. We have collaborated with FeiyuTech to offer a special discount to our readers. You can use the promocode ANUBHAVT during checkout to get 10% off while purchasing FeiyuTech AK4500 gimbal.