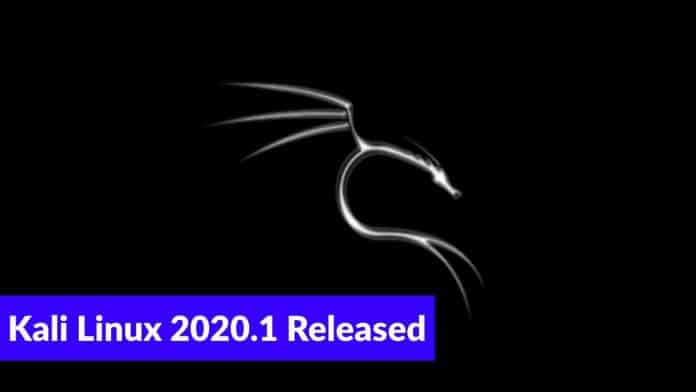 This Kali release brings several new improvements, including the highly-anticipated non-root by default.

Also Read- How To Run Kali Linux On Any Android Smartphone?

The major highlight of this latest Kali release is the addition of Non-Root by default. Starting with Kali 2020.1, there is no longer a superuser account and the default user is now a standard, non-privileged user.

Until now, users have logged on to the system with the user “root” and the password “toor”. In Kali Linux 2020.1, both the default user and password will be “kali”. On the other hand, if you install the distribution, you will be asked to create a non-root user with administrative privileges.

“Tools that we identify as needing root access, as well as common administrative functions such as starting/stopping services, will interactively ask for administrative privileges (at least when started from the Kali menu),” explains the dev team.

“We are no longer offering separate images for every desktop environment (DE). Instead, we now have a single image with the option to pick your DE during installation. This means there isn’t a download link for Xfce (which is our default option since 2019.4), GNOME, KDE, MATE or LXDE DEs. Just one image to rule them all,” the team added.

The new version also allows users to select the tool they want to include in the installation, and no connection to the Internet is necessary. An internet connection is required for this during the installation except for the standard Xfce desktop.

“We understand that Kali comes with more tools than some people use, or they have their own tools selected. Now they can install Kali without any metapackage, offering them a simple installation of Kali, so they can individually select which tools they want (instead of groups), the team said.

The Kali Live has moved to its own image, which allows you to try Kali without installing it. You can install from this image, however, it will require a network connection.

Further, ARM images for 2020.1 will continue to run as root by default and the Pinebook Pro isn’t included in the 2020.1 release. “We are still working on getting it added, and as soon as it is ready we will post it,” the team added

Kali NetHunter, the mobile pen-testing platform, also comes with some new improvements. You are now no longer required to root your phone in order to run Kali NetHunter, but that does come with some restrictions. It is now available in the following three editions:

NetHunter Rootless – Installable on all stock standard, unmodified devices using Termux. Some limitations, like lack of db support in Metasploit and no root permissions. Installation instruction is available here.

The latest Kali release also comes with a new GNOME theme with light and dark modes included by default, new tools, refreshed graphics for the installer and new menu icons.

Kali Linux also added an ‘Undercover’ mode with the 2019.4 release, which now makes it look even more like Windows 10.

Lastly, the team has added several new tools in this release, including cloud-enum, emailharvester, phpggc, sherlock, splinter. Since Python 2 reached the end of its life on January 1, 2020, the tools developed based on Python 2 have been removed.

Existing users can upgrade to the new version and those interested in downloading the ISO image for Kali Linux 2020.1 can do so by clicking here.