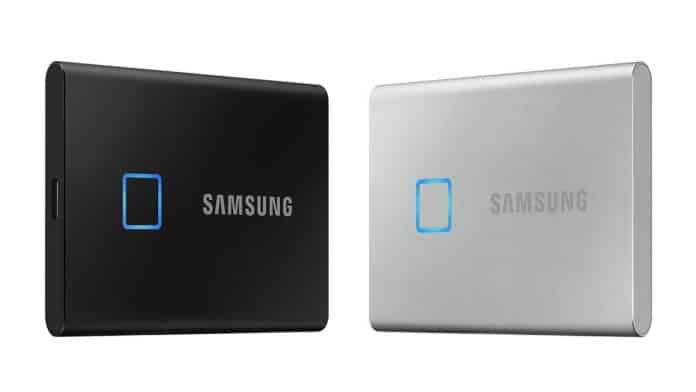 According to Samsung, the pocket-sized portable SSD T7 Touch is twice as fast as its predecessor, the T5, and up to 9.5 times faster than external HDDs. Moreover, it can also reach its maximum speed when used with the NVMe interface.

“Consumers who are constantly on the go between work, play and passion projects want to be able to securely carry their content with them,”said Dr. Mike Mang, vice president of Brand Product Biz Team, Memory Business at Samsung Electronics. “Now their data is secure thanks to the fingerprint recognition functionality incorporated into the product, which delivers industry-leading transfer speeds in a compact form factor.”

The T7 Touch uses AES 256-bit hardware encryption, which keeps the data secure in addition to the fingerprint sensor.

Thanks to the USB 3.2 Gen 2 interface, it can deliver read and write speeds of 1,050 MB/s and 1,000 MB/s respectively. The SSD also supports Android devices and should instantly show up on an Android smartphone or tablet as external storage when connected with a USB-C to USB-C cable.

Additionally, the drive comes with a “Motion LED” around the fingerprint sensor that lets you know the status of the disk at a glance if the drive is reading or writing data.

Designed for both professional and casual users, Samsung’s T7 Touch provides enough capacity to securely store large numbers of pictures, games or 4K/8K videos whether on a PC, tablet, smartphone or game console, as well as the durability to take their content with them.

The T7 SSD comes enclosed in a sleek, solid metal (aluminum) casing, but still weighs in at a light 58 grams.

Starting this month, the SSD will be available for purchase in 500GB, 1TB, and 2TB storage options for $129.99, $229.99, and $399.99 respectively in over 30 countries worldwide. Samsung is also offering a three-years limited warranty with the Samsung T7 Touch.

The storage device will be available in two color variants: Silver and Black. Following the release of the T7 Touch, a variant without a fingerprint sensor called “Portable SSD T7” is expected to launch sometime in Q2 2020.