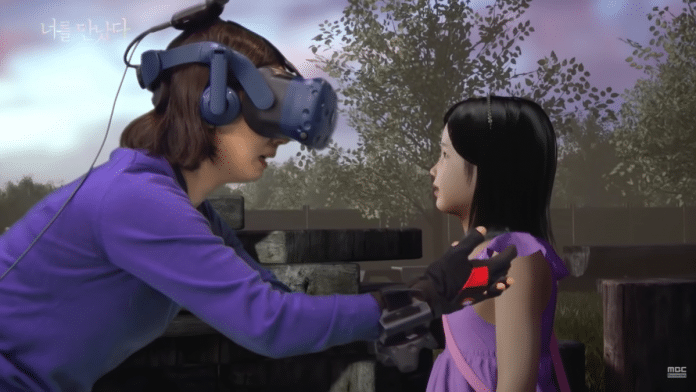 A grief-stricken mother was briefly united with her young deceased 7-year-old daughter through Virtual Reality (VR) technology in a South Korean TV documentary.

The documentary titled ‘I Met You’ featuring Jang Ji-sung, a mother of four, was aired on South Korean TV network, Munhwa Broadcasting Corporation (MBC) on February 6. Nayeon is the third of Jang’s four children who passed away in 2016 because of a rare, incurable disease called haemochromatosis.

In the heart-breaking clip shared on YouTube, one can see the mother-daughter duo spending some beautiful and emotional moments together. The tearful reunion of Jang and Nayeon is also witnessed by the child’s father, brother, and sister, who are watching it from the side-lines.

The mother of four said: “Maybe it’s a real paradise. I met Nayeon, who called me with a smile, for a very short time, but it’s a very happy time. I think I’ve had the dream I’ve always wanted.”

For eight months, the production team behind this project used VR technology to create an elaborate park scene for the mother-daughter reunion, for implementing Nayeon’s face, body, and voice, and more.

According to AJU Business Daily, who first reported the news, motion capture was used to record the VR model’s movements so that it could later be used as a model for their virtual Nayeon, and reproduce her voice.

Jang could be seen wearing VR headgear and bursting into tears when her daughter in a bright purple dress comes running towards her in the simulation, saying: Oh my pretty, I have missed you.”

Nayeon can be seen asking her mother, “Where have you been, Mum? Did you think about me?” to which Jang can be heard replying, “I do all the time” while stroking the digital replica of her daughter. When Nayeon says she misses her mom, Jang replies, “I missed you too.”

Jang, who wears a necklace with Nayeon’s ashes in the charm, can be seen conversing with her daughter, singing songs, watching her play on a swing set, and even celebrating her birthday with a cake and balloons.

At the end of the encounter, Nayeon lays down to sleep, saying that she was tired and her mother bids her goodbye.

Jang said she agreed to appear in the documentary to provide comfort for “someone who has lost a child like me, or who has lost a brother or a parent”.

“Nayeon did not smile in my dreams. In my dreams, she always had a resentful gaze perhaps due to my guilt. It was such great happiness to see Nayeon who was calling me with a smile,” Jang wrote on her blog before it was taken offline.

“Three years later, I now think I should love her more than miss her and feel sick so that I can be confident when I meet her later. I hope many people will remember Nayeon after watching the show.

“It was a dream that I always wanted to dream. My lovely three children’s laughter is filling Nayeon’s empty spot a lot. I want to live with my three children in happiness, with more love, rather than just mourning and being in pain, so that I won’t be ashamed of myself when I meet Nayeon.”

The next episode of the documentary, which is behind-the-scenes of the project, is scheduled to be aired on March 12.