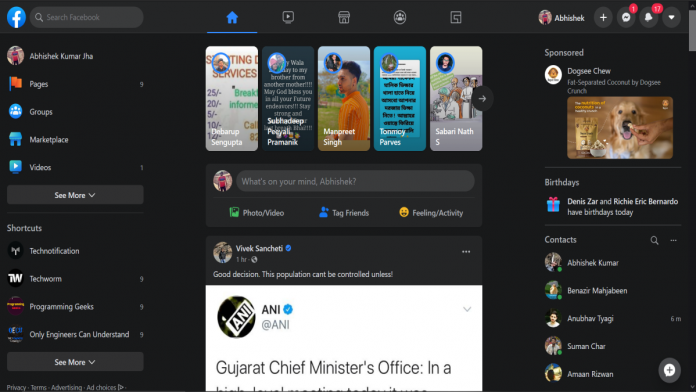 After months of wait for the dark mode theme, Facebook on Thursday finally rolled out the option to opt into a new streamlined desktop design that was first announced at the company’s annual developer conference in May 2019.

“Starting today, the majority of people on Facebook will have access to the new desktop design,” a spokesperson for the company told TechCrunch.

This new Facebook redesign interface is now available to a majority of the users and offers changes and features such as dark mode, tabbed home screen, a cleaner profile, centralised tabs for Facebook Watch, Marketplace, Groups and Gaming as well as larger fonts.

Further, there are additional shortcuts in a sidebar on the left. Stories have been moved above the “Update Status” box, pushing the status bar further down.

According to Facebook, the new dark mode option minimizes screen glare in low-light environments while maintaining contrast and vibrancy. Also, the new design site is intended not only to help users quickly find what they are looking for but also load the home page and subsequent pages faster.

The website also allows users to quickly create Events, Pages, Groups, and Ads, with the ability to preview how these will look on mobile before posting.

While Facebook will be rolling out the new streamlined desktop design as default for everyone later this year, it has already rolled out the design as an opt-in feature to “most users” starting this Thursday.

To enable the new design, you need to click on the “Settings” drop-down arrow and select “See New Facebook.”

In the same drop-down menu, there will be an option that allows you to switch been dark mode and the traditional colour scheme. You need to then select “Switch to New Facebook” for the dark mode.

If the new design doesn’t interest you, you can disable the option by going to the same menu and selecting “Switch to Classic Facebook.”