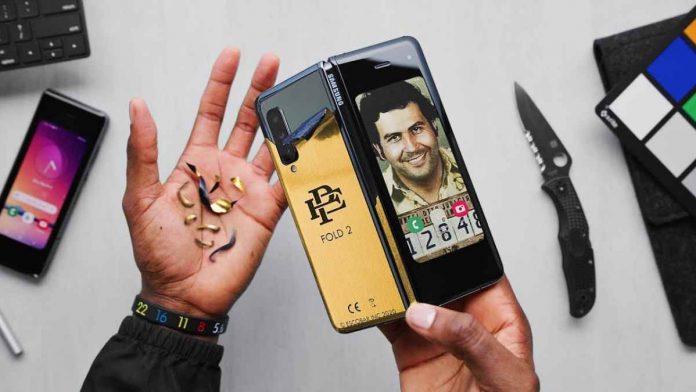 For those unaware, back in December, Pablo’s brother had launched another foldable smartphone, the Escobar Fold 1 that looked eerily similar to the Royale Flexpai for $349. But many weeks down the line, the company has yet to ship this device to users who have paid for it.

Unfolding the scam in a YouTube video titled “The Truth About The Escobar Folding Phone!”, Brownlee reveals that he never got the original Fold 1 that he had ordered from Escobar Inc. last year.

He then saw an ad of Escobar Fold 2 that was primarily being marketed as the ‘Samsung Killer’ with photos of scantily dressed models, and a catchy “Rest in Peace Samsung” tagline for $399.

Even the promo video of the phone runs with a ‘ripsamsung.com’ subtitle, which when clicked redirects to the Escobar Inc homepage.

The website describes the Escobar Fold 2 as “the best foldable smartphone deal in the world”.

Out of curiosity, Brownlee purchased the Escobar Fold 2. When he did not receive the device, he tweeted about it from his official twitter handle.

The same evening Brownlee received an “upgrade” of his first order (Fold 1) – the Escobar Fold 2 – along with an apology from the alleged manufacturer for the long delay, as the original Fold 1 was no longer available.

On unboxing the contents, Brownlee discovered that the Escobar Fold 2 was nothing but a Galaxy Fold smartphone covered in a gold sticker, which came off easily revealing the Samsung logo. The box only contained the phone and a charging cable and had no manuals, no headphones, no cover or screen protector, etc.

According to Brownlee, the whole thing was just a marketing strategy for a scam. For reference, the Samsung Galaxy retails at a price of $1,980, whereas the Escobar Fold 2 sells at $399 with the exact same design and specifications as the former phone, which is worth noting.

“This piece of tech we’ve reviewed already, it’s the Galaxy Fold… it just has gold tin foil on the back. So the interesting part now becomes the behind-the-scenes part, which is the company that’s maybe trying to sell some of them and also not ship most of them. They’re trying to scam you,” he said in a video posted to his YouTube channel.

“It’s a really poor rebranding job. If you’re reviewing an Escobar Fold 2, you’re really just reviewing a Samsung Galaxy Fold with a gold sticker on the back and some weird pre-installed mug shot wallpapers,” he said.

Further, despite taking money from customers, the company is not shipping the Escobar Fold 2 orders. It is only shipping out orders of famous YouTubers and media journalists for promoting the product and spiking sales and not to actual customers who paid real money for it.

“My theory is that they are going through orders, finding the names of YouTubers or just people in tech media or people they think will talk about the phone if they get it, and shipping those, and then just not shipping the rest,” he added.

You can check out the video below to know about MKBHD’s personal experience with the Escobar Fold 2.